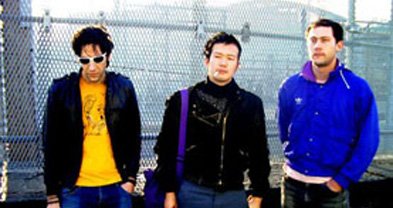 Dmonstration Drummer Aaron Wade got that "not so fresh" feeling during the band's performance at CMJ's New Music Marathon in September 2005. Playing at New York's Lit Lounge, Wade came close to pulling off a shocker reminiscent of the pre-major-label Butthole Surfers.

"Aaron dropped his drawers and proceeded to squat in the corner," guitarist Nick Barnett says. "Luckily, I yelled at him and told him to keep it in, or that would have been the end of our CMJ experience. I guess he had too much candy in his gas tank earlier in the day."

Other than that, Dmonstrations had a great time at the nation's not-quite-as-hip-as-South-By-Southwest music showcase.

"Meeting up with AIDS Wolf from Montreal was great," said Barnett. "We also happened to run into a bunch of our San Diegan friends who moved out East that we hadn't seen in a while."

In November 2005, the Dmonstrations toured the West Coast with DMBQ and Green Milk From Planet Orange. In February '06, they toured Japan, guitarist Tetsunori Tawaraya's home away from San Diego. Also in early '06, they released a split EP with AIDS Wolf on Strictly Amateur Films and Lovepump United. Their debut full-length on Los Angeles's Gold Standard Labs was released in April '06.

Dmonstrations cancelled its overseas summer 2007 tour due to a falling out with Germany-based Dial Booking, who had only confirmed around half the dates as the band prepared to depart. “We couldn't afford the gear and van rental for the whole month without shows booked every day,” reads a band press release. They tried to reach their contact Matthias at the booking agency, “but it is obvious that he has more important or pressing issues in his life right now. We were waiting over two months to get a final response from him.

“This is frustrating due to the fact that we had over eight months to plan this,” says the band. “However, we aren't willing to risk the potential to incur a substantial debt due to others’ lack of planning and professionalism. Our decision was also greatly influenced by the recent events with our friends Mika Miko, who happened to go through Dial Booking and ended up getting the runaround in Italy and losing $1,500 of their own money on their recent trip. Our friends Die! Die! Die! have also been waiting to hear of dates, and as a result of this, they have cancelled their tour too.”