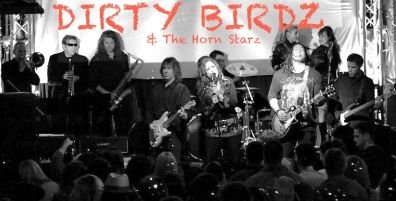 Dirty Birdz were formerly known as Vamp, the rootsy 1980s rockers remembered for their mesh of rockin’ rhythm and blues, heavy metal, and hearses. Growing up in La Mesa, the Vampsters got their first taste of Diego-style metal at the local rock club Straita Head Sound, like so many others, as well as playing around town at Tio Leos, Blue Agave, and elsewhere.

Reunited in 2010 by married couple Augie and Mercedes Scalzitti, the La Mesa-based bundle features guitars, a horn section, and choreographed background vocalists behind lead singer Mercedes, who likens herself to Janis Joplin and Etta James. The act is still anchored by original guitarist Augie Scalzitti and bassist Steve Thurston, as wellas longtime drummer Erick Manchaca, and there’s a badass brass section now, as well as a couple of sexy backup singers and another guitarist, Chuck Palumbo, also known as a WWE pro wrestler.

Usually performing as an 11-piece band, the Dirty Birdz call themselves rock & roll, but they also see themselves as serious students of blues and R&B. In 2011, they began recording an album with producer Trent Slatton (the Ramones, Rod Stewart), who used to run the band’s soundboard in the 1980s.