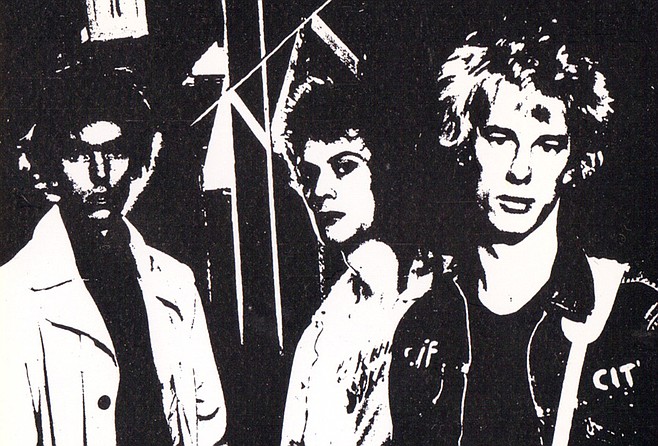 RIYL: The Zeros, the Mutants, the Hitmakers, Black Flag, the Penetrators, the Nuns, the Sleepers, Offs, Negative Trend, the Xterminators, the Misfits, the Rippers, the Avengers, the Neutrons, the Executives, DFX2, Upbeats, Cardiac Kidz, Noise 292, Ford Madox Ford

Influences: The Damned, X, Black Flag, the Germs, Flipper, the Bags, the Alley Cats, the Weirdos, the Dead Kennedys, the Clash

The Dils, featuring singer/guitarist Chip Kinman and bassist brother Tony Kinman, were one of San Diego’s first working punk bands, playing many of the city’s first punk shows, alongside the Zeros, the Hitmakers, the Penetrators, and others. Locals still talk about the near riots at venues like the Adams Avenue Theater whenever bands like the Zeros and the Dils were paired.

“Our first show was at a pizza parlor in Del Mar,” Chip recalled for the Reader in 2016. “Our posters had Jack Ruby shooting Lee Harvey Oswald. They pulled the plug on us. We didn’t even get through one song. But we kind of expected that. We played the gazebo at Holiday Park [in Carlsbad] one afternoon knowing we were going to get shut down.” The anti-establishment theme continued with singles like "I Hate the Rich" b/w "You're Not Blank" on the What? Records label.

The Dils can be seen performing "You're Not Blank" in the battle-of-the-bands scene in Cheech and Chong’s Up in Smoke, which ends with roadie-turned-drummer Andre Algovar complaining “I can't hear you guys!” without stage monitors. Minneapolis punk band Dillinger Four later covered the tune. The Dils' own live sets included occasional covers like ''What Goes On,'' by the Velvet Underground.

Algovar was replaced in 1977 by Oklahoma drummer Pat Garret (aka Rand McNally), who produced their DangerHouse Records single "Class War" (later covered by the Canadian punk band D.O.A.) b/w "Mr. Big." The Kinman brothers moved to San Francisco in the late '70s, where drummer Garret was replaced by San Franciscan John Silvers in early 1978. Their reputation was starting to spread more rapidly, thanks to features in magazines like Creem and opening slots for touring headliners like the Clash.

After recording their Made in Canada seven-inch with short-term drummer Zippy Pinhead, the Dils finished a summer 1979 U.S. tour and were talking to John Cale (Velvet Underground) about a musical collaboration. Before it could come to pass, however, the Dils split, with Tony briefly playing with SF punk icons the Avengers. The brothers' 1980-era cowpunk band Rank and File (formerly the Negative Dillingers) landed music in the film To Live and Die In L.A. They went on to other projects like Cowboy Nation and Blackbird.

In 2015, Chip Kinman (then living in L.A.) co-founded Ford Madox Ford with his guitarist son Dewey Peek. They signed to Porterhouse Records, which released a two-song seven-inch called "Expect It." Chip and Tony Kinman collaborated together again for the debut Ford Madox Ford album, This American Blues (again on Porterhouse), promoted with a video for “Dark American Night” that was directed by Jackie Sharp using footage shot in 1988.

June 2019 saw the release of Chip & Tony Kinman: Sounds Like Music, featuring 22 previously unissued performances by Chip and Tony Kinman, including tracks from the Dils, cow-punk pioneers Rank And File, industrial rockers Blackbird, and country band Cowboy Nation. Selected by Chip, and taken from the brothers’ archives, these restored and remastered tracks trace their journey with photos, ephemera, and new notes from Chip.

Chip was featured in a summer 2019 book by John Doe (X) with Tom DeSavia and Friends, More Fun in the New World: The Unmaking and Legacy of L.A. Punk.