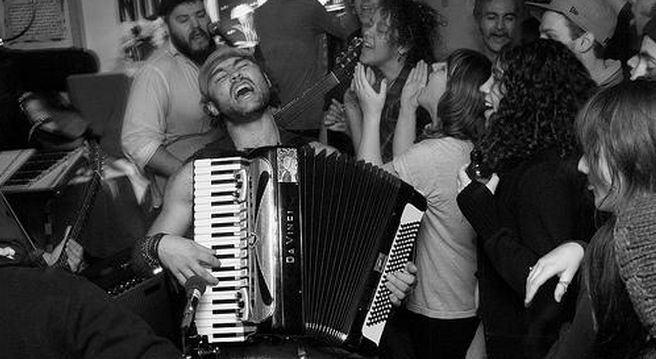 Di Nigunim is an Anarcho-Klezmer Punk band who has “no political agenda, but we try to do our part when we see a positive opportunity and direction to head in…We basically support all forms of protest that oppose, disrupt, or smash our fascist corporatocracy, war machine, racism of all types, homophobia, and other intolerant plagues, whether it tears at the roots of the system or helps the victim of domestic abuse in your neighborhood take back her freedom.”

Di Nigunim is a politically active punk band that has played protest shows on the U.S./Mexican border, at the Democratic and Republican National Conventions, at various benefits, etc.

The group’s lineup can include ten to thirteen members, making it difficult to perform on small stages and a challenge to coordinate rehearsals and gigs. The band’s instruments include the cimbalom, accordion, piano, violin, trumpet, euphonium, guitar, trombone, clarinet, drums, percussion, and bass.

“With so many members, sometimes it’s hard to get the sound right,” says Forest Borie, the band’s accordion player. “Also, we sometimes become intoxicated, which doesn’t help for staying in time.”

Their album Harrumph! was released in 2011. A trailer full of their gear was stolen in Chicago on June 12 of that year.