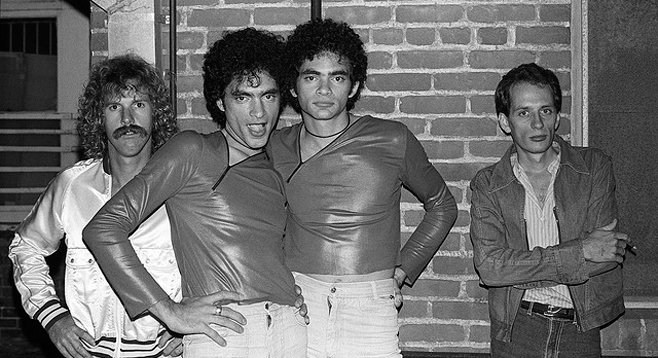 RIYL: The Sidewinders, the Injections, the Penetrators, the Zeros, Big M.R. and His All-Bitchin' All-Stud All-Stars, Steelwind, Barefoot Hockey Goalie, Syndicate of Soul

In the early 1980s. DFX2 seemed poised to blast out of San Diego and on to big arena gigs and fame. Led by twin brothers Douglas Farage (vocals and rhythm guitar) and David Farage (lead guitar and vocals), other members included a drummer from the mid-70s band Steelwind named Frank Hailey (the Sidewinders), and Eric Gotthelf on bass, who would replace Matthew Pray after the release of their album Where Are They Now.

DFX2 released two EPs, and their songs “Emotion” and “Maureen” were minor radio hits, and their videos saw much airplay on early MTV broadcasts. Their song "Octane" was co-produced by local DJ Jim McInnes. The band officially broke up in 1989.

David Farage would later play with Sensational Big M.R. and His All-Bitchin' All-Stud All-Stars, while Matthew Pray would turn up with Barefoot Hockey Goalie. Drummer Frank Hailey, who also played with bands like Syndicate of Soul, moved to Arizona with his wife in the 1990s: he passed away in early 2018.

DFX2 songs have been recorded by several other performers, including Scottie Blinn’s bands the Mississippi Mudsharks and Black Market III.