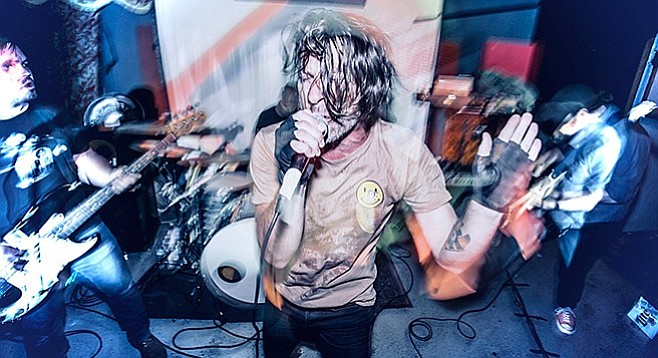 Sound description: The band says its music sounds like "Prince in a knife fight with a giraffe underwater being stung by jellyfish."

Influences: 30 Foot Fall, Screaming Trees, Louis XIV, No Use For a Name

"We take our influences as inspiration for originality rather than as a regurgitation of sounds," according to alternative rockers Demasiado. The band describes its music as sounding like "Prince in a knifefight with a giraffe underwater while being stung by f-cking jellyfish." For several years, Unwritten Law drummer Wade Youman played with the group, still guesting on stage with them from time to time after he rejoined U.L.

In 2009, singer/guitarist/keyboardist Clayton Edward formed the band Pretty Too Bad, and Demasiado became inactive. Singer Jon Piotrowski relocated to Austin, Texas, to record projects under names like Cry For Us Black Swans and Glass Stars. He returned to San Diego in 2017, reuniting the band for a performance at the Casbah on April 29. A compilation album was released the same year, One Night in a Vision Cult.