American roots music that is raw, unapologetic, far from pretentious, and simply aims at having a good time.

Deborah Blake formed Zero Gravity as a rock cover band in 1998. Over the years, she has evolved into a soulful blues-influenced performer of roadhouse rock, blues and alternative country. The musician lineup varies according to project, member availability, and venue. 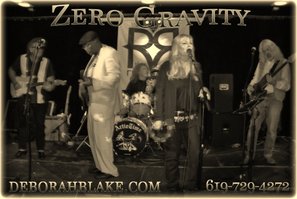