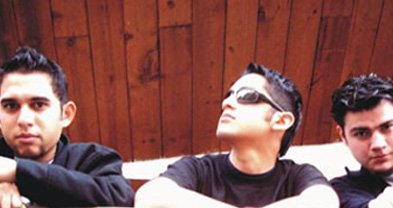 "Punk rock is really starting to get big in Mexico, especially in Mexico City," says singer/guitarist Irving Lugo, who estimates that there are now over 100 punk bands in Tijuana. But, "Norteño is still the king of music in Tijuana."

"Tijuana is considered a tough place for rock bands. In the hardcore scene, if a band sounds too happy, that can be a problem. People will throw bottles of soda at you, or they will call you names. Like, they will scream in your face 'fag.' We don't write too much about love.

"We've been trying for five years [to get a stateside show]," says Lugo. "We didn't know anybody in San Diego." Lugo credits his manager for arranging Debajo del Promedio's first U.S. gig at the House of Blues in March 2007.

"Yes, he's been a good manager for Debajo," says Helu, vocalist for TJ power-pop/glam band Rodeo Drive. "He started helping us out too. We were going to work with him, but he wanted 20 percent for five years. That was too much."