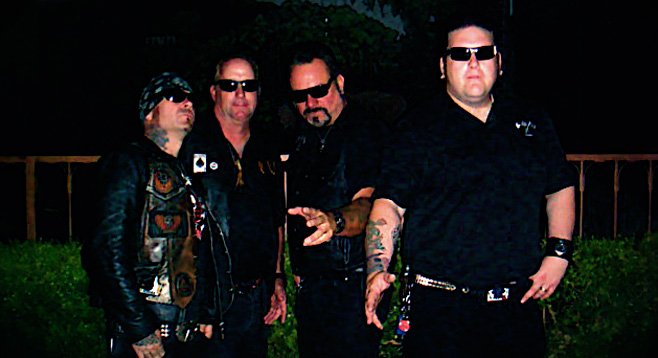 Deadbolt calls itself "The Scariest Band in the World." The band often features two bass players who are called "The Wall of Thunder."

The band originally formed in 1987 as a trio featuring guitarist and vocalist Harley Davidson, bassist and vocalist Robert "RA" MacLean, and drummer Les Vegas. Vegas eventually left the band. Other members of the band have included bassist Gary "3rd Degree" Burns and drummer Tank Johnson. Former members include The Phantom (bass and guitar), Bad Time Charlie (drums), Claymore Mines (bass), The Coroner (bass), Coffin Boy (bass), and Colin Bryce Fraser III aka Moose Cutter (bass). Fraser went on to co-found the band Mercury Legion. The latter player alleged to the Reader that “I have never received a single album royalty nor did I ever sign the contract for the release of Tijuana Hit Squad, of which I was there for every session for Cargo Records, let alone its sale to Capitol Records, and any inquiries to broker a buyout of my rights through outside law firms have been met by...persecution.”

Three members of the band were in a short-lived offshoot group called the Strangers 1800, which performed music from spaghetti western films and TV westerns and released one EP, When Men Were Men and the Sheep Were Scared.