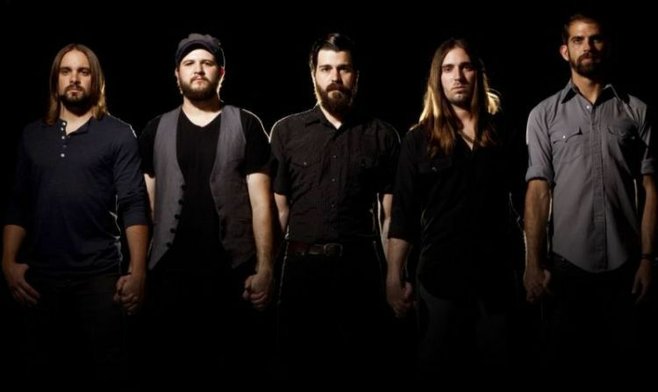 Sound description: Alt-country rockers, with elements of blues and psychedelia.

Based in North County, most members of psychedelic alt-country rockers Dead Feather Moon grew up around Vista, including Justen Berge and Jesse Kling. It’d be a stretch, but you could say the band started in an Escondido high school.

“That’s where I met two of the guys who are in the band,” says Berge, who later moved to neighboring Vista. “We played together, and we played in different bands, and we went our separate ways for a couple of years. Then, we put it back together.”

Berge and Jessie Kling started DFM by “listening to records together and then playing guitar. [Kling] had this notebook full of ideas for song titles, and Dead Feather Moon was one of them. I said, ‘That’s good enough for a band name.’” DFM was co-founded with Tyler Soule.

Berge says that’s how he sometimes writes songs, by crafting a title first. “I read as much as possible. I’ll read a phrase and I’ll jot it down. I just have pages and pages of things like that, words and sentences that mean something to me or that make me feel something. I do my best to get them into songs as quickly as possible.”

The first show they played as Dead Feather Moon was in 2009 at 710 Beach Club in Pacific Beach. According to Berge, “We got our foot in the door of the Belly Up right about the time that we got our fifth member. That’s become our home base.”

They released their first EP Leave Heaven to the Birds in July 2009.

A debut full-length Dark Sun, tracked in February 2011 at White Horse Recorders with producer Aaron Swanton, was released in July 2011. A little over a year later, it won Best Alternative Album at the 2012 San Diego Music Awards, where the group also got a nomination for Best Alternative band.

The message of Dead Feather Moon? “That we’re a very hard-working band, and an honest band,” says Berge. Honest? “We do our best to write the most original music. Some bands emulate other bands maybe more than they should.”

In October 2014, they were named Best Alternative at the San Diego Music Awards.