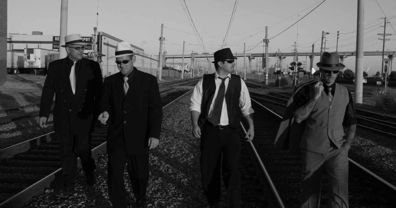 Sound description: Cool music that doesn't stay in the box. In fact, it sets the box on fire and uses it to light a cigar.

Dead as Dillinger plays an all-original lineup that spans several genres from rock to punk to alternative to psychobilly. The group was formed in 2003 by longtime locals Adrian Byers (Leadfoot, Knuckle Busters) on lead guitar, Matt Novack (Barefoot Hockey Goalie) on drums, and guitarist/singer Mike Garritson.

Vocalist and bass player Roman Terenzini, in his signature black suit, is a transplant to San Diego from the D.C. area, where he played in the Plastic Toys. Guitarist/singer Luke Boole, who replaced Mike Garritson, is Santa Cruz native and surfer. Their album Cowboys and Serial Killers was recorded in 2006 at Capricorn Studios.

According to Terenzini, "Our worst show was at Buster Daly's. The only light over the band was this weird red thing, so we couldn't see anything. And what was worse, every time I got too close to the mic, I got shocked. Blind and electrocuted is no way to play a show. It was a mess."

As of 2014, the lineup was Terenzini, Novack, and Byers. In April of that year, they released their Mad Man EP. "The band is dead and posed in various ways on the cover," says Terenzini. "At the center is the Mad Man, arms outstretched an laughing like, well, a mad man. It is representative of the time and turmoil this EP has taken. Poking a bit of fun at ourselves."

Mad Man EP (which dropped April 25 at the Ken Club) was their first recording since the 2006 album Cowboys and Serial Killers. Now reduced to a trio, the EP includes former rhythm guitarist Luke Boole.