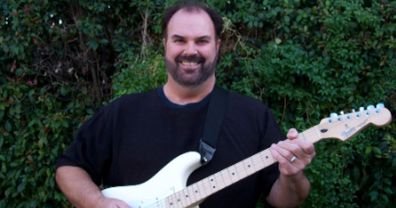 Based in Imperial Beach, D.C. Hathaway is a solo act and a BMI affiliated songwriter, producer, engineer, studio musician, and talent developer. His music career began at the age of eight, and he was touring professionally by the time he was sixteen with various classic rock and country bands.

“I use to worry and wonder ‘What would I do if I lost my voice,’ and then the biggest fear I had in my life came true,” says Hathaway of the accident that left him suffering from Spasmodic Dysphonia. “I live with the condition, which involves involuntary muscle spasms caused by trauma of the accident. This severely affected my voice, so I was forced to retire from singing. But I still manage make a living as a musician and songwriter.”

Since the accident, “I’ve had to depend on others to sing my songs, while I rediscover my identity as an instrumentalist. I had to learn to allow my fingers to become my voice.”

Hathaway refocused his efforts on guitar and keyboards, though his persisting condition is never far from his thoughts. “I still have recurring dreams from the accident that nearly took my life, but at the same time I feel I’m a walking miracle. I’m living proof that miracles really do happen, just because I’m still breathing.”

The breadth of his musical exploration also changed after the accident. Hathaway used to be known for country-ish music, performing as a Kenny Rogers clone in a Las Vegas tribute and sharing stages with Blake Shelton, Jo Dee Messina, the Judds, and Lacy J. Dalton. “My current music features a wide variety of genres. I write haunting rock ballads, smooth jazz instrumentals, and country knee-slappers, along with hip-hop, classic rock, and Christian originals.”

Hathaway earned his Music Degree from Southwestern College, where he frequently teaches a curriculum he developed himself, “The Art of Songwriting.” He’s also in demand as a public speaker, talking about his condition for events like the National Spasmodic Dysphonia Association conventions and regional symposiums.

His inspirational life story has also generated interest from screenwriters. “There are two actors who should play me in a movie,” he says jokingly. “The younger version of me should be played by Val Kilmer, while the older version should be Jack Nicholson. People walk up to me all the time and say I look like Jack Nicholson. I don’t agree with them, but there you go.”

Since he’s so willing to share his story, is there anything about D.C. Hathaway that people may NOT know? “Sure. I once wanted to be a professional wrestler, I shave my armpits, and I’m still afraid of the dark.”

His music is published through his own publishing company D.C. Hathaway Music. He volunteers on the praise and worship team at Eastlake Community Church in Chula Vista, as well as teaching an Art of Songwriting curriculum.