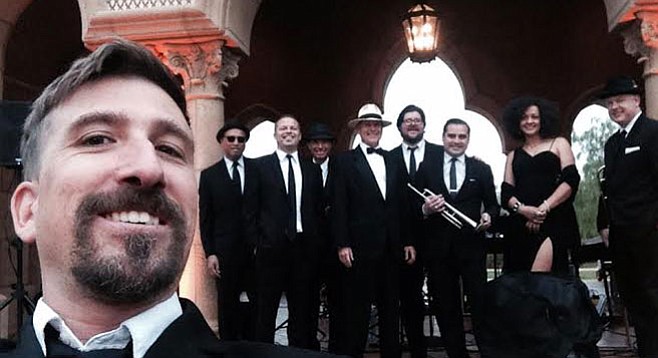 David Owen is a pianist, composer, and arranger with a strong affection for African American-influenced styles of blues, gospel, R&B, and jazz. He traveled to Brazil as an exchange student in 1992, later graduating with a degree in Music from the University of New Mexico and began playing a large breadth of styles and gigs.

After moving to San Diego in 2004, Owen performed with a series of variety, rock, jazz, and salsa bands, playing everything from solo piano to big band arrangements,

Owen has periodically performed at the piano bar at the Red Fox Lounge, a post manned for years by Shirley Allen until she died in 2006. “I was new in town and had no other gigs, and I knew a lot of old songs. I worked there five nights a week for a year before getting fired for pissing everybody off.”

He claims the Red Fox has fired him several times, once because “I lit up a joint in the place at one thirty in the morning.”

Owen graduated from UNM with a music degree in 2000. “I am a full-time keyboardist, for the most part, and doing quite well working with many great musicians here in San Diego. I do teach music.... I used to be a full-time math and science teacher, but my credential did not transfer to California.”

With a repertoire of over 800 songs, Owen says, “I haven’t tried to showcase original music yet. Arrangements, accompaniment, and solos are where my creativity is expressed on recordings and gigs. The gigs I’ve played will give an indication of styles: cruise ships, piano bars, restaurants, dance clubs, weddings, casinos, corporate gigs, variety bands, and churches of many denominations.”