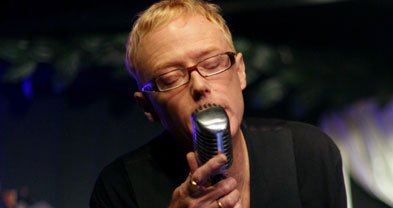 David J. Haskins, better known as David J, was the bassist for the gothic British rock band Bauhaus and a co-founder of Love and Rockets, named after a popular comic book series.

After Bauhaus split, he released his first solo records, Etiquette of Violence and Crocodile Tears and the Velvet Cosh. He also played bass on two Jazz Butcher albums, and was a member of the Sinister Ducks, alongside comic book writer Alan Moore (Watchmen, V For Vendetta, League of Extraordinary Gentlemen, From Hell, etc.). He also released a collaborative single, “Armour” b/w “Nothing” with artist and poet Rene Halkett, of the original Weimar Bauhaus school of art and design.

In 1985, J, his brother Kevin Haskins, and Daniel Ash formed Love and Rockets, though he maintained his solo career, releasing Songs from Another Season and Urban Urbane. He also released one of the first #1 hits from the newly created Modern Rock Tracks charts, with “I’ll Be Your Chauffeur.”

J participated in a Bauhaus reunion tour in 1998, which included a date at the San Diego Civic Theater. Love and Rockets broke up in 1999. Following what was billed as a one-off performance of Bauhaus at the 2005 Coachella concert festival, that band reformed for a successful tour of the Americas in late 2005 and Europe in early 2006.

In 1995, J joined cello player Joyce Rooks (who in the seventies and eighties played guitar and sang with San Diego groups like the Cockpits, the Dinettes, and Trowsers) and Don Tyler to make up the instrumental ensemble Three, whose first album was Evocations. Another collaboration with Rooks was an ensemble called Cabaret Oscuro, who came and went around 2001.

After moving to North County San Diego around 2003, he started work on the instrumental score for an independent film about Elizabeth Short directed by Ramzi Abed, entitled The Devil’s Muse. He also began turning up around town as a DJ at various events, as well as once joining a Bauhaus tribute band onstage at the Casbah.

In San Diego, he mentored local singer-songwriter Renata Youngblood and recorded with her, reportedly playing her debut EP for Bauhaus front man Peter Murphy at the 2005 Coachella music festival, thus landing her an opening slot on Murphy’s subsequent solo tour.

He composed the original music for a stage production of Samuel Beckett’s Cascando in 2005. In 2008, J released Go Away White with his Bauhaus bandmates, as well as reuniting Love and Rockets, who played at Coachella Music and Arts Festival that same year.

“Writing Silver for Gold,” says J, “it felt as if I had entered into a subtle psychic relationship with this beautiful dead girl, and she was actively encouraging me to write. She became a bright light that glowed all the brighter whenever I started to create. It was as if she was feeding on the attention. This might sound highly fanciful, but that is how it felt. Edie was enduring in her ultimate role, that of the muse.”

Some incidental music for the production was provided by Marcelo Radulovich, of the local Trummerflora arts collective. J collaborated again with Radulovich for a 2010 single, “Hank Williams to the Angel of Death.”

In early 2011, his seven-inch single “Tidal Wave of Blood” b/w “Blood Sucker Blues” was released, taken from his planned goth-inspired concept album Not Long For This World.

J worked on the seven-inch alongside Shok, a former member of Thrill Kill Kult. The inspiration behind the record came from a side project that J and Shok had collaborated on with former Concrete Blonde singer-bassist Johnette Napolitano.

“Shok and I had previously been working with Johnette Napolitano on other vampire-themed music that we’ll be releasing later this year. We just kept running with the vampire theme.”

J turned to KickStarter.com to raise the $5000 needed to record the full length Not Long For This World. Via the website, fans can donate directly for creative projects.

“Like most artists, I no longer have a record label that is capable of advancing funds,” adds J. “This is really the only way to go now that the industry is in such a decimated state. It harks back to the old days of artist patronage and also the true spirit of the whole DIY punk ethic.”

The idea for the full-length isn’t much of a departure from J’s gothic background. “Over the years I had been writing songs about mortality. It dawned on me that I had a sort of ‘accidental concept album’ on my hands. What do you expect from an old goth?”

A single from Not Long For This World was released in early 2011, “Tidal Wave of Blood.” He also collaborated with local girl duo the Glossines for the song “The Bottle, the Book, or the Dollar Bill.” The following year, 18-year old McKenna Frazer’s debut single was a cover of David J’s “I'll Be Your Chauffeur,” recorded in collaboration with J and Thievery Corporation’s Rob Garza.

That summer, he was heard on a new single from Amoeba, “What's in My Bag,” followed by the October release of his memoir Who Killed Mr. Moonlight? Bauhaus, Black Magick and Benediction.

Spring 2019 saw the release of a video for his new single "The Auteur (Redux/The Starlet's Cut)" featuring guest vocals from actress Rose McGowan. The video, created by Scott Saw of Fuze Studios, previewed forthcoming double album Missive To An Angel From The Halls Of Infamy And Allure. The album features Paul Wallfisch (Swans), Larry Mullins AKA Toby Dammit (Nick Cave and The Bad Seeds), Sean Eden (Luna), and Emily Jane White (backing vocals). "The original version of The Auteur was released as part of an EP in 2002," says J, "an old song that tells a much older story but one which in light of the whole #metoo movement now has an addendum."