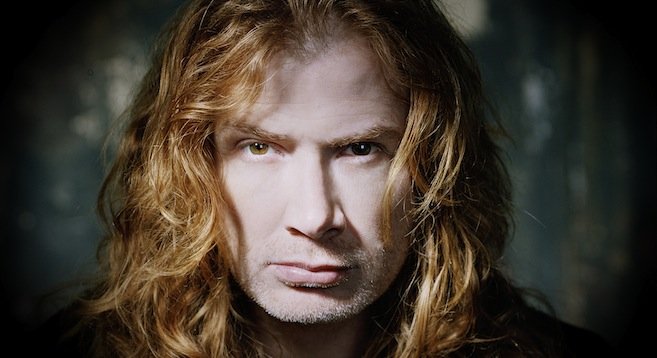 Megadeth founder Dave Mustaine was born September 13, 1961, at Grossmont Hospital in San Diego. His parents split when he was young and his mom raised him as a Jehova's Witness. He left her La Mesa home as a teen.

In 1981, he quit his first band Panic to become Metallica’s original lead guitarist, before getting replaced by Kirk Hammett in 1983. Mustaine moved to Rolling Hills Estates in Fallbrook in late 2004, along with his wife Pamela, their kids, and their horses.

In Summer 2005, Mustaine told KNAC's Philthy Phil that he won't perform certain songs now that he's embraced Christianity. "The ones that I did that I'm not doing anymore that to me are just wrong [include] the Sex Pistols' 'Anarchy,' 'cause it says, 'I'm an anti-Christ.' I'm not really anti anybody, so I had to kind of take a look at that." Regarding his status as the only permanent player in the band he calls Megadeth, Mustaine said, "I think the people are aware; when I left Metallica and came home on a bus, I did not stop off and pick up a bass player. I went home and started it on my own."

Mustaine's Gigantour -- with Megadeth, Dream Theater, and others -- experienced booking problems in 2005. Several venues, including SDSU's Open Air Amphitheatre, couldn't accommodate the show's second stage, and promised bands (such as Symphony X, Dry Kill Logic) couldn't play. Mustaine posted on his website, "We're working on the problems," but the snafu was never explained.

Besides San Diego, fans in San Antonio, Cincinnati, and Boston missed out on a second stage. Billboard's attendance figures indicate that promoters sold 2228 seats of 4598 available for the 2005 tour's San Diego stop.

Gigantour's second edition launched in September, 2006, with Megadeth, Lamb of God, Opeth, Arch Enemy, Overkill, and others sharing the bill. The tour was sponsored by Microsoft's game "Gears of War," the name of a song on Megadeth's subsequent album.

Mustaine filed a petition for divorce in San Diego Superior Court in 2006, seeking dissolution of his marriage to Pamela Anne Casselberry, whom he wed in April 1991 before the couple moved into their $1.2 million house in Fallbrook's Rolling Hills Estates. Built in 1990, the 9.5-acre property included vineyards, pastureland and a pond, with a five bedroom five-bath country English-style main residence featuring 5,345 square feet of living space and ten fireplaces. The property also included a bar, an office, a gym, a paneled media room, and a pool house that Mustaine converted to a state-of-the-art sound and recording studio.

The couple had a son in 1992 (Justis David), a daughter in 1998 (Electra Nicole), and another son in 2002 (Victor Gar). Victor Gar was named after Megadeth mascot Vic Rattlehead and former band drummer Gar Samuelsson, who died in 1998. Justis plays guitar and has appeared in several local theatrical productions, including one in which he played Elvis Presley.

Megadeth's DVD Blood in the Water: Live in San Diego, filmed in May 2008 at Cox Arena, premiered on HDNet television in early November '08.

The recording process for Megadeth's twelfth studio album began on January 7, 2009, at the band's own Vic's Garage studio in San Marcos. Released by Roadrunner Records and produced by Andy Sneap (Sabbat), it's the group's first with album guitarist Chris Broderick, who replaced Glen Drover at the end of 2007.

In early 2011, Mustaine and former Anthrax guitarist Dan Spitz began making an album together. Mustaine revealed the news to New Zealand's 3news.co.nz and said that Spitz invited him to work on the record, which will be released under the moniker Deuxmonkey. Mustaine said the album sounds like Soundgarden, Disturbed, and Rage Against the Machine.

In early summer 2011, Mustaine said “I’ve got the dubious honour of managing a band called Baptized in Blood, and my manager and I are managing Testament.” Mustaine told Rock News Desk while hinting of his upcoming retirement from Megadeth, “We’re doing some other things outside the scope of playing music so, once I hang up my guitar, I’m still going to be very much involved.”

On December 10, 2011, Mustaine jammed with Metallica on five songs at the Fillmore in San Francisco. “I wish I would have had a little bit more opportunity to get prepared with the band,” he told Powerline. “You know, because I’m a perfectionist. I would have liked to have had my sound just so and make sure when I did the solos they would jump up the volume and stuff like that that I’m used to, but we were at a club and playing at a club and playing like a club band. It was fun to take off all the rules and regulations and stuff and kind of shoot from the hip.”

Then his March 30, 2012 X-ray results came in, after undergoing surgery for stenosis, a neck and spine condition that he says was caused by years of headbanging. “Totally fused,” he tweeted, “and I can FINALLY start exercising. Thank God, and thanks for your prayers.”

The 2013 edition of his Gigantour featured Megadeth, Black Label Society, Device, Hellyeah, Newsted, and Death Division, kicking off on July 3 in Gilford, NH and concluding August 11 in Toronto. Before hitting the road, Mustaine teamed up with pop jazzster Kenny G for a Funny Or Die video spoofing ads by retailer Men's Wearhouse, which had recently earned headlines for firing their founder-turned-TV-spokesman. The vid features Mustaine narrating the story of a young metal fan preparing for a job interview at Megadeth Wearhouse.

Mustaine did a series of Guitar Center appearances while the band toured in support of its album Super Collider, hosting meet-and-greets and autograph signings at Center locations in cities including Dallas, Oklahoma City, and Brookfield, WI. The Megadeth frontman was also the guest on the 150th episode of the Wikimetal podcast, now streaming online. Mustaine spoke about his composition process, the aggressiveness in his life and music, highlights of his career, and future projects now that he's closed his San Marcos recording studio.

Before his April 12, 2014 appearance with the San Diego Symphony, Mustaine told Blabbermouth that “Dean Guitars has made a unique guitar for me that looks like a copy of a Stradivarius violin that had a baby flying V, and it’s an amazing guitar.” The program included Wagner's “Ride Of The Valkyries” from Die Walküre, Vivaldi's “Winter” from The Four Seasons, and Dvorak's “Symphony No. 9” (the New World symphony).

His appearance with the Symphony was promoted with a new Symphony Interrupted Cabernet Sauvignon wine, the debut limited-edition release from Mustaine Vineyards of Fallbrook.
symphony).

He performed an impromptu three-song acoustic set with Megadeth members at the Hard Rock Cafe in Istanbul, Turkey on August 4, 2014, following their appearance at the city's Rock OFF Festival, playing unplugged versions of “She Wolf,” “A Tout Le Monde,” and “Symphony Of Destruction.”

Shortly thereafter, however, Megadeth cancelled their involvement in Motorhead's Motorboat cruise after frontman Dave Mustaine was told by his doctor to cancel all performances for the next two months, due to complications arising from a previous cervical spine surgery.

In October 2014, local authorities announced that the Mustaine's mother-in-law, who suffers from Alzheimer's disease, had gone missing, with a search underway throughout San Diego county. Her body was found in late November, on a nearby trail where she'd apparently wandered and died.

His house in Fallbrook's Rolling Hills Estates was listed for sale at $5.375 million in late 2015, as he announced an impending move to Nashville. Built in 1990, the 9.5-acre property includes vineyards, pastureland, and a pond, with a five bedroom five-bath country English-style main residence featuring 5,345 square feet of living space and ten fireplaces. Over a year later, it still hadn't sold.

As of 2016, Mustaine's son Justis was involved in managing bands like Havok. The 2017 Megadeth Boot Camp was described as "the ultimate fan experience," with the "once-in-a-lifetime" chance to hang out on Mustaine's still-unsold private estate in Fallbrook for one weekend next March.

The idea for Mustaine Vineyards was inspired by Mustaine’s pairing with the San Diego Symphony. Mustaine, his wife Pam and Vineyard co-founder/partner, wanted to offer his traditional Megadeth fans as well as symphony patrons something to share together at the symphony. They worked with a local winery to develop a cabernet, served it at his symphony show, and immediately sold out of the cabernet sauvignon. They decided to plant an estate vineyard at Le Reve their estate in Southern CA and planted a mini Bordeaux varietal.

"I've been diagnosed with throat cancer," reported the Megadeth singer in June 2019. "It's clearly something to be respected and faced head on - but I've faced obstacles before. I'm working closely with my doctors, and we've mapped out a treatment plan which they feel has a 90% success rate. Treatment has already begun."

"Unfortunately, this requires that we cancel most shows this year. The 2019 Megacruise will happen, and the band will be a part of it in some form. All up to date information will be at megadeth.com as we get it. Megadeth will be back on the road ASAP. Meanwhile, Kiko, David, Dirk and I are in the studio, working on the follow up to Dystopia - which I can't wait for everyone to hear. I'm so thankful for my whole team - family, doctors, band members, trainers, and more."