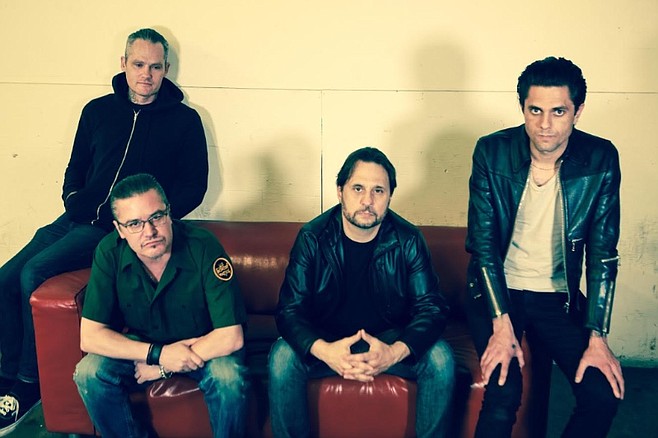 The group came together during session booked by Lombardo with Pearson and Crain, shortly after Lombardo's band Philm had split. Their live debut was December 1, 2015, at the Casbah.

Lombardo later recruited Faith No More/Mr. Bungle frontman Mike Patton to be their lead singer, alongside Pearson and Crain. A self-titled debut was released via Ipecac and Three One G in August 2017.

A new video debuted in summer 2017 for "Seizure and Desist," from the debut Dead Cross album, directed by Eric Livingston. Another video premiered later that year, "Church of the Motherfuckers," that they described as "a visual rebuke of organized religion."

At the end of 2017, the band announced a summer 2018 European tour, including a June 17 performance at the Download Paris festival.

May 2018 saw the unannounced release of a self-titled, four-track digital EP, later offered as a limited edition 10-inch black/green swirl vinyl record. A music video for the track "My Perfect Prisoner" was produced by Eric Livingston, who also created the cover art for the band's full-length album debut and the new EP.

The EP release was followed by a six week European tour, kicking off June 2 at Barcelona’s Primavera Sound festival and including stops at several festivals including Download, Novarock, Graspop, Roskilde and Dour.

An early 2019 EP from Bronx-based rapper Kool Keith includes a mashup of his song "Uncrushable" with the Dead Cross track "Church of the Motherf#ckers," produced by Luke Henshaw. A video for “Uncrushable” was created by David Hall (writer and director of Where in the Hell is the Lavender House: The Longmont Potion Castle Story).

During the early 2020 pandemic shutdown, they released a cover of Black Flag's "Rise Above" that the band says was "created in solidarity with the Black Lives Matter movement and staunchly opposing police brutality and systemic racism. As such, the track opens with a recording of a Los Angeles resident voicing his displeasure with the LAPD during a public comment period from a regularly scheduled LA police commission meeting." The video was filmed by Lombardo with the Lonely Rager and Becky DiGiglio.