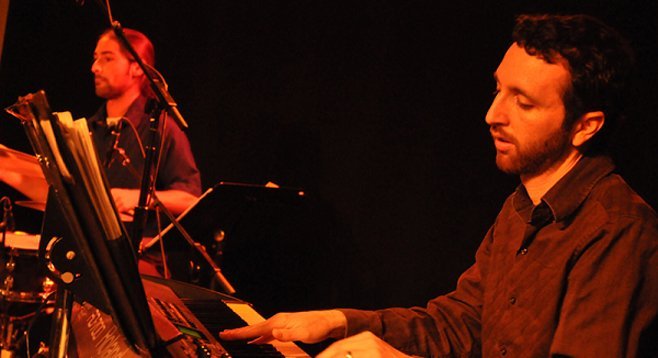 A San Diego native, Brazilian-influenced jazz pianist Danny Green is equally versed in jazz, Latin and classical music. He received his B.A. in piano performance at UCSD, from which he graduated with honors and won the Jimmy Cheatham Jazz Award. He received his Master's Degree in Music (Jazz Studies) from SDSU in 2011, and was awarded Outstanding Graduate Student and earned several scholarships. He has studied jazz with Kamau Kenyatta , Rick Helzer, Anthony Davis, Marcos Silva, Chico Pinheiro, and others

Green combines Brazilian and Latin influences, and cradles them in mainstream jazz and classical nuances. He's signed to the San Diego-based independent record label, Pacific Coast Jazz, while his own label Alante Recordings is an associate imprint under the Pacific Coast Jazz umbrella.

In September 2009, his full-length With You in Mind won Best Jazz Album at the San Diego Music Awards.

Over the next couple of years, Green staked out his own personal improvising aesthetic, (heavy on the music of South America), and assembled a top-notch quartet to interpret his conceptions, including bassist Justin Grinell.

Driving the group, from the rhythmic perspective, are the drums of Julien Cantelm, a modernist who might be drawing from the same well that nurtured guys like Pat Metheny Group drummer Antonio Sanchez. He’s got the intricate, subdividing ride cymbal patterns down, and he conjures up waves of clicks and clacks from multiple rim-shots all over the kit.

The secret weapon in the Green quartet is the criminally under-rated saxophone master Tripp Sprague. He can play in any style, and his soloing capabilities would make any ensemble shine. Still, despite the high level of musicianship, Green says some gigs can get pretty strange.

“A few years ago, I was hired to play piano for a harbor cruise. They had an electric grand piano, so I was thrilled that I didn't need to load any equipment on and off the boat. The first thing I noticed when I sat down at the piano was that the keys were kind of salty. Not the ideal situation, but not a big deal. Then I started to play and the piano would only sound one note at a time. I spent a while working on this, and finally fixed it. I then noticed the right pedal was messed up. I had to press it once to sustain the notes, and again to release the sustain.”

“To make matters worse, when I pressed the left pedal, a bossa nova drum beat started playing. So all this happened before the party began. About fifteen minutes into the party, we're already out to sea, and a drunk woman comes up to me and says 'I can play piano!' She sits down next to me and places her wine glass on the piano and within about five seconds the boat rocked and her wine spilled into the piano. The piano fried, since it was electric, and that was the end of the gig for me. I still got paid and got to hang out at the party for the next three hours, watching the crew try to fix the piano with a hair dryer.”

A new full-length, A Thousand Ways Home, was released in October 2012, featuring backup from Julien Cantelm on drums, Justin Grinnell on bass, and Tripp Sprague on sax. Guest players include Eva Scow (mandolin), Peter Sprague (guitar), and Claudia Villela (vocals). The album was recorded by Michael Oyster at Avant Studios in Encinitas, and was mixed and mastered by Tripp Sprague.

Frequently accompanied onstage by Justin Grinnell and Julien Cantelm, Green recalls a November 2012 gig where "The chemistry was really happening and we were also feeling some great vibes from the audience." As for the worst gig ever, "There was one corporate event I played for in which the client asked us to turn down to the point where we were barely audible. Since nobody could hear us anyway, we decided to make light of the situation and switch instruments. We sounded like total hacks, and that's when we got the only compliment of the night."

His 2018 album One Day It Will mates his jazz trio to a classical string quartet. “The trio features bassist Justin Grinnell, who hails from Santa Rosa, and [San Diego drummer] Julien Cantelm,” Green told the Reader. “[Both] are both masters of their instruments and they have the ability to be supportive and interactive at the same time. They put a lot of thought into the music and come up with all sorts of cool grooves.”

In addition, “The new album features San Diego Symphony violinists Kate Hatmaker, and Igor Pandurski, along with [San Diegans] violist Travis Maril, and cellist Erica Erenyi. I met Erica years ago through guitarist Dusty Brough, and I met Kate at Coronado School of the Arts. We both taught there. Kate introduced me to Travis and Igor.”