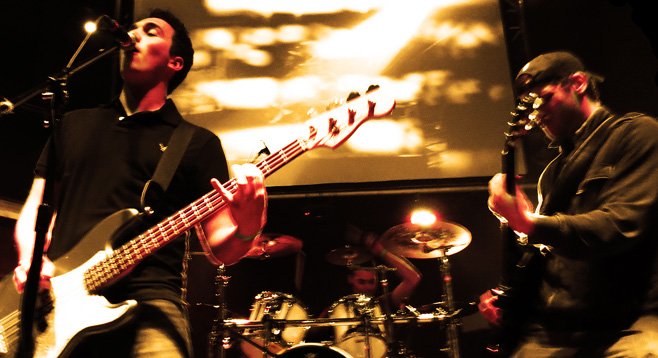 Based in Pacific Beach, Danny & the Tramp is a rock band founded by Danny Tatulli (vocals, bass) and John Langan (guitar). After performing through their college years at Penn State University, Tatulli and Langan decided to move west to pursue their lifelong dream of music.

“We said goodbye to our families and our jobs and our girlfriends [and] we were sleeping on the floor of a friend’s apartment for the first few months,” says Tatulli. “We played open mike nights at Lestats, Longboards, the 710 Club.” He says that’s how they built the fan base for what would eventually become a band. They found their drummer, native San Diegan Branden Josefosky, on Craigslist. “It clicked.”

Indeed, it was bro-love at first sight (and sound). Asked what exactly that sound is, Tatulli says “Let’s just say, if the Beatles and Blink-182 had a one night stand, we’d be the guy hitting on their love child.” In late 2011, a fourth member was added, Ezekiel Parnow (“We actually call him 4th guy”) on piano, guitar, and vocal harmonies.

The group has performed at numerous venues throughout town. Their American Dream EP, recorded in Golden Hill at Blackbox Studios, was released in 2011. The following April, they competed in a Battle of the Bands at the Indie Music Fest at the Henderson Pavilion in Green Valley-Las Vegas, Nevada.