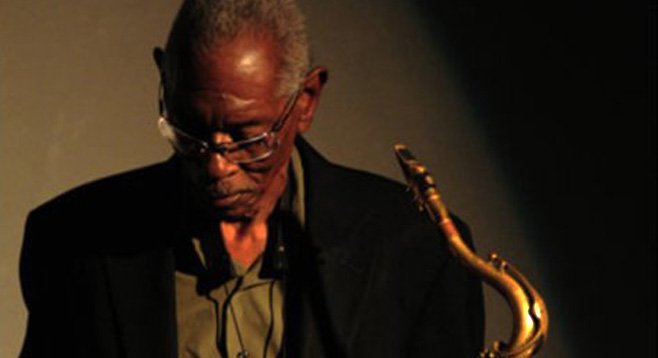 Jazz tenor saxist Daniel Jackson has played professionally since 1958, touring with Ray Charles, Buddy Rich, Willie Bobo and others. He dispells the longtime rumor that he was born in the backseat of a limousine.

“My mom told me that my father was a chauffeur. For a doctor. And that when I was ready to be delivered, he called the doctor and told him, and the doctor said, ‘Okay, bring your wife over to the clinic.’ Which was the Scripps clinic [in La Jolla]. Wasn’t a hospital yet. And it didn’t have any black people born in it. Not in 1937.”

Asked who got him started in the music biz, he replies “Art Farmer. Jimmy Smith. Buddy Rich. Frank Butler. Billy Higgins. I had a lot of fun playing with Wes [Montgomery] when I was in the Air Force. I think he was a postman somewhere. I was just sittin’ in. I would write music for him because he couldn’t read or write [music]. He’d come up with some tune and he’d say, ‘Hey, man, can you write some notes down for me?’ And I’d do that.”

For a sax player, Jackson kills it on piano. “I never had a piano lesson in my life. I wouldn’t know how to teach piano. Wasn’t anybody around to teach me how to play...a guy came up to me and said he'd never heard that style of piano playing before. I said that's because most people who play piano have had lessons.” He's delighted at his joke, giggles his high-pitched laughter, which sounds musical.

Jackson says “Sometimes I’ll do a concert over at Dizzy’s. That’s okay. But I don’t want to be in bars. I did that already. Nothin’ in there that I want. At some point you say, ‘Damn, I’m three quarters of the way to a hundred. Maybe there’s a party I don’t need to go to.’”

In January 2011, a series of Daniel Jackson tribute concerts happened at Croce’s. As of 2012, he says he and his life are in decent shape. Elegant, even wizened, he appears to have made it through a health scare, and he has 17 or more cats to take care of as he looks toward tomorrow, while holding onto yesterday. “I still have an old rotary telephone. Had it since 1947. Same number. Most people that know it are dead. It rings, and I wonder who the hell that could be?”

Jackson took home a Lifetime Achievement trophy at the October 2013 San Diego Music Awards. He passed away in early September 2014 at the age of 77.