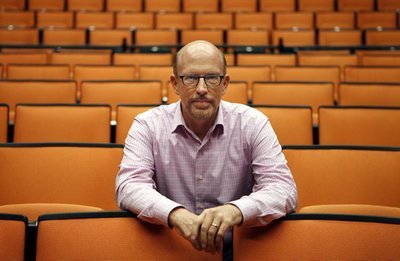 Classical guitarist Dan Atkinson has produced nearly 300 concerts. In addition, he created the annual UCSD Jazz Camp, headed up the Revelle Lecture Series, and served as the director of arts, humanities, and languages for UCSD Extension.

Since 1989, Atkinson has been involved in expanding the San Diego jazz scene exponentially through his work at UCSD and as director of the Jazz at the Athenaeum concert series.

The San Diego native didn't become a serious jazz fan until he went to Berlin to study classical guitar with Klaus-Dieter Schutze, who was surprised that his student was unfamiliar with the art form. "He was incredulous that I had no knowledge of jazz as my own country's greatest contribution to music, and essentially shamed me into listening and learning about it", says Atkinson.

He came back to the states for graduate school in the Bay area and quickly became hooked, after a steady diet of jazz at Yoshis and Kimballs, two of the big clubs in town.

Jazz at the Athenaeum has grown steadily under his leadership and has provided local fans the opportunity to hear such globally acclaimed musicians as McCoy Tyner, Charlie Haden, Lee Konitz, Charles Lloyd, Dave Holland, Tomasz Stanko and Kenny Wheeler.

How does he arrive at the programming decisions? "I am actively involved in the Western Jazz Presenters Network, a professional organization of jazz presenters in the western US and Canada. I also travel at least once a year to New York City to listen to jazz and generally also attend one or more festivals each year."

In 2001, he became Director of Arts, Humanities and Languages at UCSD Extension. In that capacity, he founded the UCSD Summer Jazz Camp which just completed it's 9th season. Open to students ages 14 to adult, the camps draw participants from all over the world to study with the phenomenal faculty he's assembled. Instructors have included Charles McPherson, Mark Dresser, Anthony Davis, Michael Dessen, Geoffrey Keezer, Peter Sprague and more.

"The camp aims to expose students to a full spectrum of jazz from 1940 to now. I call it a total immersion in jazz--similar to learning a language abroad," says Atkinson.