Fuses the original native rhythms of the Kumeyaay Band of Sycuan Indians with hip-hop beats and rap lyrics.

The Dago Braves -- rappers Mike "Odoe" Allen and Terrence "Poodeezy" Brown -- are cousins who live on the Sycuan reservation near Alpine.

Their topical lyrics address subjects like the changing political climate, biracial and multiracial culture, life on the Rez, life outside of the Rez, and music and life in general.

Being both African American and Native American, the duo express the struggles and advantages of being born between races. Their music reflects their local life experiences by fusing the original native rhythms of the Sycuan Band of the Kumeyaay Nation with the distinct hip hop beats of the San Diego rap scene.

The Dago Braves are fronted by cousins Terrence "Poodeezy" Brown and Mike "Odoe" Allen. "We are both three-quarters black and a quarter Native American," says Brown. "Our grandma is full-blooded [Native American]." 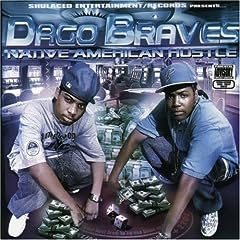 Last Fall, the Dago Braves won a Native American Music Award for Best Rap Hip Hop Recording, for their debut CD Native American Hustle. They also played the award show afterparty, and were seen walking the red carpet at the Do Something Awards (which is the official pre-party to the Teen Choice Awards).

Brown says the lyrics on Dago Braves’ first album are positive, not gangster. "Our lyrics come from our firsthand experiences; we try and keep it real. If we say we're driving in a Benz, we're really driving in a Benz. There's no lyin'."

“Having the respect of our community means more to us than anything,” says Mike "Odoe" Allen. “It is a huge honor for us and we’re so thankful for the acknowledgement.”

“With their successes,” says Sycuan’s Paula Gould, “they're beginning to put the San Diego rap scene on the national platform. The goal; to make San Diego, and all its talent, a music force to be reckoned with, in much the same way the East Bay was in the ‘90s and the way Atlanta is now.”