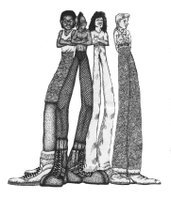 Funk rock band Daddy Long Leggs evolved in the early 1980s from a group called Join Dragon Feather. "I was invited to Join Dragon Feather...after being convinced by Mike Watson to move back to San Diego," says Damien Dunmore, who at the time was one of the few black and and rollers in town. "We wanted to do something great. We had influences but we did not want to sound like anyone else, so we pulled the frets off our guitars, that is why we did not play ska, which was very popular at the time. We were a mixture musically and the four of us created Daddy Long Leggs."

By 1984, that foursome included magnet-high-school students Robert Walter, Mike Watson, and Damien Dunmore, who were soon joined by Brian Jordan. They turned up all over town through around 1996.

For a time, Dunmore’s dark skinned younger sister Fatty Freelunch was a backup singer and dancer with the group. “We were the first band to play SOMA, and we were the last band when it closed.” Ms. Freelunch is talking about Len Paul’s original south-of-Market Street venue downtown. The band also played places such as L.A. punk showcase Madame Wong’s and the Palladium, where they opened for Fishbone.

Daddy Long Leggs opened for Mighty Joe Young (later Stone Temple Pilots) in 1990. “I loved the way Scott Weiland danced,” she recalls of that show at the now-defunct Bodie’s in the Gaslamp. “He asked me to go up onstage with him and dance with him on ‘I Call My Baby Pussy,’ by George Clinton.

Half of the core band members were black, and the other half were white. “It was hard times for us black punk rockers back then because we had to go to white clubs to hear the music we liked. We’d be having a great time onstage, and then we’d see the crowd separating. You’d see skinheads coming to the front of the stage. They came in to do damage. You could see it in their eyes. It was hard to tell between the white-supremacist-Nazi-skinhead punks and the regular punk rockers who had the chains, suspenders, combat boots, and bomber jackets. My friends told me terrible stories of being attacked by skinheads. At least four to five shows were shut down because of them.”

According to another band member, “If anything, we were funk rock, with punk and ska as mere pepper-grinder grits on the table around the dish. We also attempted to blend metal, reggae, prog, jazz fusion, and world fusion, to name a few.”

As of 2012, Dunmore lives in the Pacific Northwest. Now in her 40s with four children ranging in age from 2 to 24, Freelunch fronts her own six-member reggae/funk/rap/R&B band called Fatty Freelunch and the Natives.