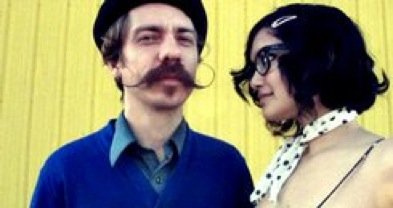 RIYL: Kill Me Tomorrow, the Sess

Wentz, primarily a drummer and vocalist, is somewhat of a minimalist with regard to band lineups — Kill Me Tomorrow is a three-man act, and the offshoot, Tender Buttons, was one person on keyboards and Wentz with a mike. When Tender Buttons no longer had tender moments, Wentz was open to a new side band.

“Shelby and I were playing music with some friends of ours,” says Wentz, “only Shelby was on drums, and I was on guitar. We started messing around before and after practice with just Shelby on bass and myself on drums and soon found we had half a song or two done by the end of every session. We seemed to finish each other’s sentences, musically…this was at the very end of 2008, just after Kill Me Tomorrow got back from Europe.”

The Dabbers were formed shortly after that, with a limited-edition, self-titled 7-inch single released in November 2009. “On crazy-colored vinyl,” says Zack.

When he’s not playing music or spending time behind the counter at M-Theory Music, Wentz writes fiction. “Art has always been the higher priority for me, but I suppose that’s why I’ve never done terribly well with day jobs.” His first novel, The Garbageman and the Prostitute, was published in 2006, prefaced in 2004 by a Kill Me Tomorrow CD with the same title.

As for music, “Pop is personal,” Zack says. “I like the kind that produces the sort of floaty, blissed-out, whirling dervish vibe — songs I can put on repeat for years, the quietly exploding shit that talks to your DNA.”

In early 2015, the band announced that they'd be providing music for an upcoming film called Lullaby, based on a book by Chuck Palahniuk.

Gubba-Reiner and Wentz launched a new band in 2017, Forest Grove, along with drummer Ryan Bradford, playing their debut gig that October. Their debut album was recorded and mixed by Ben Moore at Singing Serpent and released in August 2018.