CYKA has featured Kit Johnson and Jayden Fullerton (both from Pharmacy) alongside players like Nox Anger from the Seks, who was replaced by Jonny V a little less than a year after the band formed, and Eric Macrum. Their concert debut took place June 4, 2016, at Art Around Adams.

Several new songs were released in early 2017, including "It's So Easy" recorded live at the Merrow in Hillcrest. Kit Johnson passed away April 26, 2018, after reportedly suffering shortness of breath.

Thanks for the quick fix, Jay! 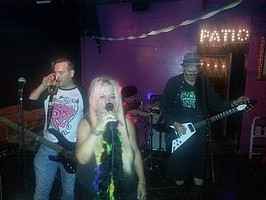 Kitty at The Go Lounge w/CYKA