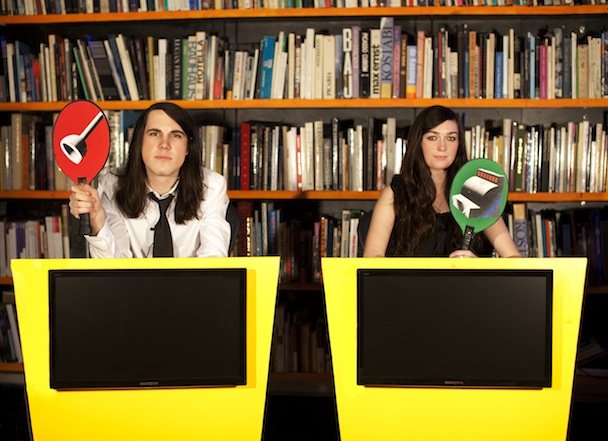 Ryan Mattos, AKA Brian Oblivion -- who once fronted a Slayer cover band -- and Madeline Follin -- whose stepfather co-founded White Zombie -- are the male-female duo known as Cults. Having met in 2009 at a Willowz concert, when Oblivion was tour manager for the Willowz (featuring Follin’s brother), their first digital three-song 7 inch released via Bandcamp.com earned them a Best New Music rave from the taste-makers at Pitchfork. The lo-fi sixties surf pop girl-group sound of Cults has earned them much acclaim on other music blogs as well.

Follin is said to have landed a recording contract while still a pre-teen, singing with her stepfather’s band Youth Gone Mad (who recorded her with Dee Dee Ramone). In addition, Follin appeared in a video for another of her brother’s bands (Guards) and sang on a track by Dom called “Bowl Cut.”

In summer 2010, the lo-fi girl groupies took filmmaking classes while spending time in NYC. Around the same time, Lily Allen flew the band to England to discuss signing them to her new record label, In The Name Of. In May 2011, they released a full-length on Allen’s label called Go Outside, engineered by Shane Stonebeck (M.I.A., Vampire Weekend, Sleigh Bells).

Their 2011 UK tour wrapped up August 30 in Tunnels, Aberdeen. On January 20, 2012, they played their single “Abducted” on Late Night with Jimmy Fallon, with Cory Stier sitting in on drums. A 2012 tour of Japan, Australia, and New Zealand included local Cory Stier sitting in on drums. They played the Pitchfork Music Festival on July 14, 2012, at Chicago’s Union Park, and released a new record the following year, Static.

Their album The Offering was released in October 2017, preceded by a single for the title track and a single and video for "I Took Your Picture." The video, directed by Elliott Sellers, was shot in Piermont, NY, where Cults first recorded Go Outside, and their first EP. The ending scene was shot on top of Brian Oblivion's roof in NYC, where the band had relocated.

After the album's release, Follin and Oblivion embarked on a multi-country tour with guitarist Gabriel Rodriguez, bassist Max Kamins, and drummer Marc Deriso.