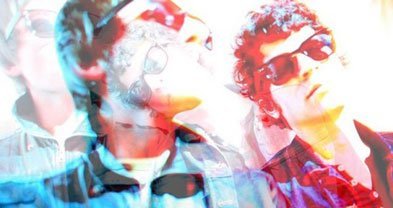 Influences: Spiritualized, the Prayers, the Plot to Blow Up the Eiffel Tower, Some Girls, Mika Miko, the Jesus and Mary Chain, Echo and the Bunnymen, the Spacemen 3, HEALTH, the Mae Shi, Abe Vigoda

Crocodiles began as an indie/fuzz-rock duo featuring Brandon Welchez (the Prayers) and Charles Rowland (Some Girls). They’ve been playing together since they were teenagers in San Diego bands such as the Plot to Blow Up the Eiffel Tower and the Prayers. Welchez is the vocalist and programmer, while Rowland plays guitar, keys, and electronic drums.

In December 2008, the band No Age listed a Crocodiles song among their favorite songs of the year, with writeup shortly to follow in Stereogum and thefader.com. Most of the critical praise and popular plays revolved around their song "Neon Jesus"

After signing a two album deal with Fat Possum Records in early 2009, the band found itself touring as an opening act for Ladytron.

“We had already been booking a U.S. tour that would have kept us out till the end of April,” says Crocodiles singer Brandon Welchez (who is married to Kristin Gundred). “They [the Faint] contacted someone at our label or something. We were happy when we found out because it meant that we would be playing to more than 20 people a night.”

The band released its debut album Summer of Hate in 2009. The album cemented Crocodiles’ reputation as Southern California’s surliest discontents, with song titles like “I Wanna Kill,” distorted guitars and snarling vocals from the Jesus and Mary Chain playbook, narcotic rhythms à la the Spacemen 3, and a couple of electronic numbers from the krautrock school.

In subsequent interviews, the band came off as a tad San Diego–phobic. Is Summer of Hate targeted at their hometown? Welchez says no, not directly. “Growing up in Poway, I was surrounded by racists and homophobes and rednecks. It was like getting beat up by idiots in white [pickup] trucks and being called a punk-rock faggot every day of your life for 12 years. It’s a horrible place to grow up,” he says, “if you’re not a fuckin’ jock.”

But Poway has also played host to other pop success stories such as blink-182 and Unwritten Law. “It’s probably just a reaction to what growing up there is like,” he says, “but I can’t speak for any other bands. The only other friend I have from Poway is Gabe Serbian. He’s in the Locust.”

Welchez says it wasn’t easy to escape the gravitational pull of the hometown rock scene. “If you have any ambition,” he says, “you have to go out on the road and suffer. If you’re claiming music is your main thing and that it’s more than just a hobby, then you should have the balls to get out of here.”

Released in summer 2010, their second full-length Sleep Forever features guest keyboardist Robin Eisenberg. Around the same time, they also released a four-song EP, Fires of Comparison, which has no vocals, supposedly because (according to the band) they all caught strep throat from sharing a pipe with a hobo in Presidio Park.

For the subsequent tour, the group expanded to a five piece. “We grew up on the road, really,” says Welchez. “Our old band, the Plot to Blow Up the Eiffel Tower, toured a lot.” When in San Diego, he says they used to play the Ché Café.

Welchez says he misses his friends when touring. “I miss Rancho’s [Mexican restaurant in North Park] and Mama’s Lebanese Bakery next to Live Wire.”

Their song “Sleep Forever” won Song Of the Year at the 2010 San Diego Music Awards. Shortly after the Award show, however, Crocodiles cancelled the remaining dates of their U.S. tour, due to what they called a family emergency.

Speculation was rife that the move may have been related to their song and video “Kill Joe Arpaio,” about the controversial Arizona sheriff, which keeps landing the band in national headlines. The tune uses snippets from Arizona talk radio shows over instrumental music.

Their single “Mirrors” dropped February 28, 2011, with a B-side cover of Elton Motello’s “Jet Boy, Jet Girl,” after which they embarked on a February European tour with White Lies.

Welchez, Roland, and concert bassist Marco Gonzalez also released a book of poetry called Machine Gun Brothers that was only available on a tour with the Fresh and Onlys.

The duo’s summer 2012 album Endless Flowers was recorded with their concert backup players, bassist Marco Gonzalez, drummer Anna Schulte, and keyboardist Robin Eisenberg. Its first single “Sunday (Psychic Conversation #9)” was first made available digitally, before getting a vinyl release on March 26 with a new B-side, a cover of “Fascist Cops” by the Kids.

Says Welchez, "This record was done with a full band, whereas the first record was just the two of us...there's a natural cohesiveness that forms when you play night after night for crowds ranging from beloving (sic) to hostile." He laughs. "Hopefully, the audience will hear the tightness."

Endless Flowers was less a studio assemblage than earlier Croc-o-records have been in the past. This time, the approach was more of a whole band effort, now that the Crocs have expanded into a five-piece. "But I don't think any one way is better than the other. People have strict philosophies and that's wrong. The creative process is fine."

In summer 2012, the band did several European shows (Amsterdam, Paris, and Berlin), including a June 7 gig onboard the Royal Princess Cruise Liner in London. By this time, they had relocated to New York City. Welchez, who is married to Dum Dum Girls front woman Dee Dee Penny, is much happier these days living in New York, in upper Manhattan near Harlem to be exact.

"Culturally, San Diego is very tied to the beach, and I never was into that. Flip flops and Jack Johnson white guy reggae isn't really my thing." He says his band was all but ignored by alt-rock fans in San Diego. "We can draw 300 in New York, but when we lived there, maybe only 20 people would come hear the Crocodiles play at the Casbah."

They signed with Shock Records for the Australian and New Zealand releases of Endless Flowers, which dropped in those countries on August 10, 2012. A video for their single “Cockroach,” off their 2013 album Crimes of Passion, debuted on the Rolling Stone website that summer.

Their sixth album Dreamless was released in October 2016, preceded by singles for "Telepathic Lover" and "Not Even In Your Dreams." The album is less guitar-centered than their previous recordings, emphasizing a spacious, synthesizer and piano-driven sound. “We’ve always been a guitar band and I think we just wanted to challenge ourselves and our aesthetic,” says Welchez. “It didn’t start as a conscious decision but within the first week Charlie’s mantra became ‘fuck guitars’. Only one song has zero guitar but in general we tried to find alternatives to fill that space.”

Dreamless was recorded in Mexico City over the course of six weeks by core duo Brandon Welchez and Charles Rowell, with an assist from friend and occasional bandmate Martin Thulin (Exploded View). Between them, the trio shared instrument duties, with Welchez and Rowell handling the lion’s share of guitar and bass, Thulin and Welchez the live drum work, and Thulin focusing largely on keys.

A video for the song "Not Even In Your Dreams" was directed by Dani Miller.