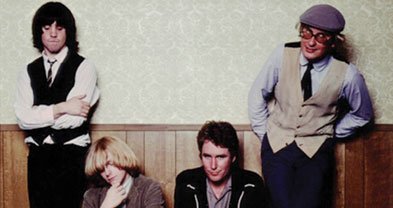 RIYL: The Gants, the Seeds, the Yardbirds, the Kinks, Pretty Things, Downliners

Influences: The Gants, the Sting Rays, Sky Saxxon and the Seeds, the Beatles, Phil & the Frantics, Chuck Berry, the Outcasts, Little Richard, Larry & the Blue Notes, the Damnation of Adam Blessing, the E-Types, the Savages, Los Mockers, the Gonn, the Enfields, Zakary Thaks, the La De Das, Cynics, the Ugly Ducklings, the Basement Wall, the Syndicate of Sound, the Nightcrawlers, Chesterfield Kings, Shadows of Knight, Remains, Kenny & the Kasuals, the Haunted, DMZ, Dimentia 13, the Count Bishops, the Bad Seeds, the Standells, ? & the Mysterians, Plan 9, Miracle Workers, the Five Americans

The original Crawdaddys lineup formed in 1978, inspired by British rhythm-and-blues groups of the early 1960s, such as the Pretty Things and Rolling Stones. The original lineup included singer Ron Silva, bassist Mark Zadarnowski, guitarist Steve Potterf, and drummer Dan McLain. Potterf and Silva were both in the similar garage band the Hitmakers.

The quartet signed to Voxx records in 1979, releasing an album the following year and a 45 and EP in 1980. Having played together for awhile, they even played on albums by others, including Spooky Tooth, though the group fractured with various Silva-fronted lineups taking the band through 1984.

McLain, later known as Country “Dick” Montana, passed away in 1995 while on tour with the Beat Farmers. Potterf apparently stopped making music.

Many early Crawdaddys recordings were mastered by Stan Ross, who mastered "In-A-Gadda-Da-Vida" for Iron Butterfly and worked with Phil Spector.

The band reunited in 2011 for a pair of shows: June 10, headlining the sixth annual “Go Sinner Go” festival in Spain, and again on September 2 at the Casbah. Memorial Day weekend was spent shooting at the Rhino Pop Up Store with filmmaker Eric Rife, in preparation for their September reunion show.

The 2011 Crawdaddys featured Silva and Zadarnowski alongside members from slightly later lineups — guitarist Peter Miesner, keyboard player Keith Fisher, and drummer Gordon Moss. The last time Zadarnowski, a South Park resident, and Silva, who currently resides in Los Angeles, had performed together was in 1993, at the now-defunct venue Bodie’s downtown.

Silva said the reunion is due to the tenacity of Spanish promoter Edu Sinner. “The guy has been emailing me for a couple of years now, trying to get the band for his festival. I recently moved back to Southern California, [so] it makes more sense,” he said. “I just thought now’s as good a time as any.”

Though Sinner has brought numerous American bands to Spain for his events, he was particularly excited to score the Crawdaddys. “They’re one of my favorite bands. I’ve always wanted to bring them here. After three years of talking, we got it,” he said, and explaining Spain’s continued fascination with San Diego’s ’60s-influenced bands. “This is real music, from the gut...I’m sure that even after another 50 years, Crawdaddy Express will still be considered a fantastic record by young R&B fans.”

Zadarnowski didn’t find it unusual that his band’s reunion had been set in motion by music fans in Spain. “The Spaniards are certainly receptive to all the old San Diego stuff. Probably even more so than San Diego,” he joked.

“We’ve rehearsed a handful of times,” said Silva. “It’s just like the old days, except we’re all a little bit fatter.”

Another reunion performance was staged October 21, 2016 at the Casbah.

This is going to be a great show! Also would love to see Crawdaddys in Spain!