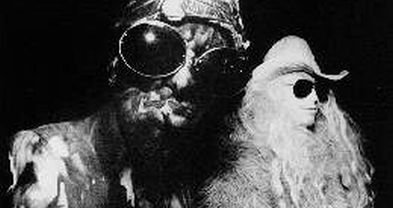 The band was most renowned for its rowdy live shows, in which audience members were often showered in various substances such as blood, water, and honey, while band members ignited fires within the performance area. Their stage performances were a communal theatrical experience, often incorporating burning effigies, smoke, explosives, milk, and even naked women. Crash Worship was avant-garde, but it meshed well with other bands in the San Diego scene.

They formed in 1986 as Crash Worship - ADRV (Adoración de la Rotura Violenta), initially as a studio project, but soon learned the power of performing in front of a live audience. The disorder of the band's live shows often invited attention from police, who would forcibly stop the band's shows. Their often-paganist and heathen imagery also caused outcries.

Encinitas native John Goff says he was asked to join Crash Worship because he played bagpipes in high school. Honing his 'pipe skills with no less traditional an ensemble that that of Balboa Park's House of Scotland, he's also lent some skirting adornment to other arty local acts, including guest stints around town with Three Mile Pilot (he's featured on the first track of the group's second album). “They [Crash Worchip] would use fire extinguishers filled with pig blood at their shows. They would have underwater explosives that would spew house paint. I was there when part of the Ché Café caught on fire at one of their shows.”

The group released several albums and singles of both live and studio-recorded music, most of which is improvised. They rarely played any of their studio material at shows.

After much successful touring in the United States for many years, Crash Worship followed suit with two full European tours in the '90s. However, the band was deemed "unmanageable" by many labels, booking agencies, or clubs, which proved difficult to tour much afterward.

The group disbanded in the early 2000s, with the members moving to various other cities in the United States and forming their own solo and side projects. Bagpiper/drummer/guitarist/keyboardist John Goff and his brother Will went on to form the electronic band SSI, releasing albums like Pax Romana and E Pluribus Unum, on their label Chlorophyll Records. Goff also played with Johnny Superbad & the Bullet Catchers, and then Physics, as well as producing records by Rob Crow and Heavy Vegetable for his own Way Out Sound label and overseeing studio projects for the Nortec Collective. In 2016, Goff helped produce Noise, the experimental quartet that includes artist Shepard Fairey (known for his 2008 Obama “Hope” posters) and singer Merritt Lear.