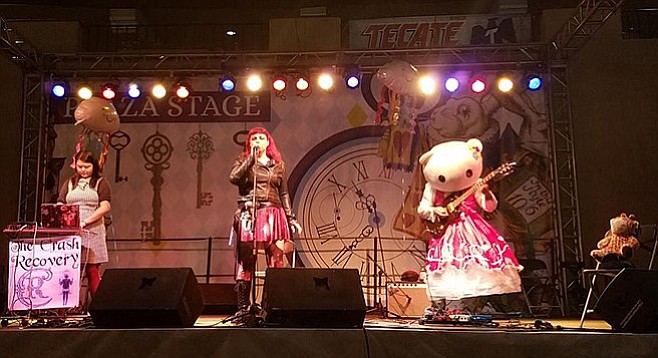 Based in Mission Valley and Jamul, the Crash Recovery is an electronic rock group which has opened for Green Day, P.O.D, and Accident Experiment, as well as playing venues like the Viper Room, the Whisky A Go Go, Soma, House of Blues San Diego, and the Del Mar Fairgrounds.

In 2016, Crash Recovery recruited Syren Franco (Citizens in Peril), the niece of Mexican Música Norteña
composer Enrique Franco, who put her band Blackwater Prophecy on hold in order to join.

With members portraying robotic musicians à la Steam Powered Giraffe and Satanic Puppeteer Orchestra, the theatrical electro-rock trio has little in common with Franco's previous ensemble. “The Crash Recovery is more electronic and ambient, so the Crash Recovery is to Blackwater Prophecy what A Perfect Circle is to Tool. The lyrics are less aggressive, more poetic. There are three of us — guitar, synth, and vocals.”

The trio recorded several singles produced by David Bottrill (Tool) and Erich Talaba (Yellowcard), including "Oracle" and "Buffering," planned for an EP release.