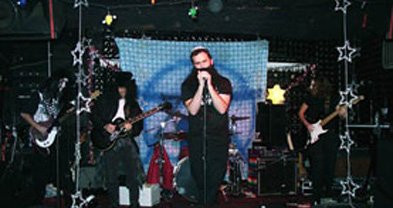 The band is headed by longtime Rookie Card frontman Adam Gimbel, whose first band PEN13 (“I refused to be in a band called PEN15”) included his co-workers at Tower Records; Laurie Ann Coda, Mike Carnivale, and Brian Vanella. “It wasn’t a cover band, but we did a few. When we played our first and only real show, in Jason Pratt’s barn, we opened with the Replacements’ ‘Hootennany’ and, when we went into the first note, my guitar strap broke. A fitting beginning to my lackluster musical career.”

As for the not-so-secret origin of Cover Me Badd, Gimbel says “It all started when Sean Martin from the Heavy Guilt innocently reposted a flyer featuring a picture of Oasis on F-Book and asked a very important question: Did anyone know if Whistle Stop’s F#@cking in the Bushes was a DJ night or an Oasis cover band?”

Adam informed him that it was San Diego’s best Britpop DJ dance night but asked a question of greater importance: Would he want to DO an Oasis cover set? “The answer was hell yes and, within 24 hours, the classic Blasphemous Guitars rhythm section of Tim Peacock and Brad Smith were recruited and a new side project, the Fookin’ Wankers, was born out of nowhere.”

One CMB project, the Depeche Mode–inspired Blasphemous Guitars, has waged online war against a more straight-faced tribute. “Blasphemous Rumours is an L.A. Depeche Mode copycat band that proves yet again that most tribute bands have zero creativity,” says Gimbel. “Now, Blasphemous Guitars gets confused with their name all the time. Still, the feuding was worth it, just to hear their singer tell me that no one would confuse us with them because they were ‘much more grand.’”

After recording Blasphemous Guitars Live 2005, Gimbel says he met former Depeche Mode keyboardist Alan Wilder. “In getting asked to chauffeur him to and from M-Theory for an in-store signing, I thought about giving him a copy of this recording from when we first started and only did DM songs. Glad I didn’t. Though, it would’ve been funny to have it playing when he got in.”

Having dived into the tribute subculture with his rotating groups, Gimbel says the world of tribute acts is a strange but lucrative scene filled with musicians trying to get famous pretending to be other people. He gained some insight to the tribute mindset when Blasphemous Guitars shared a bill with a U2 tribute band named Joshua Tree.

“We were going to have a girl do this burlesque thing, and Joshua Tree’s manager told us, ‘I can’t have her near my Bono because his girlfriend gets really jealous.’ Just hearing the manager refer to the singer as my Bono was good enough for me! Then the band comes out and they’re so serious. You can’t even look for more than a minute because it’s so creepy how much they’re into it.”

In 2010, Gimbel and company were doing a monthly trivia contest (Musical Pursuit) and another event they call anti-karaoke night (Too Cool For Karaoke). Later that year, they were nominated for another San Diego Music Award.

Gimbel also happens to be an ordained minister, capable of performing weddings. “I'm not a real rabbi, but the city allows you to have a temporary license to be a deputy marriage commissioner and perform weddings.”