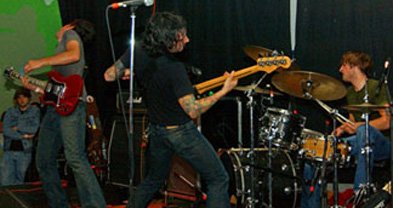 Counterfit formed in September 1999 in Fairfield County, Connecticut, but soon relocated to San Diego. The band's lineup at this time consisted of Justin Rodriguez on bass guitar and lead vocals, Adam Allen and James Dennis on guitars, and Allen's brother Marc on drums. Their first EP, On the Downside, was released in 2000 on local label Alphabet Records. Shortly thereafter, Dennis left the band to attend college, and Daniel Reed was brought in to fill the vacant guitar position.

Their second EP, From Finish to Starting Line, was released the following year on Negative Progression Records. That summer the band played on the 2001 Warped Tour. Their first full-length album, Super Amusement Machine for Your Exciting Heart, followed in 2002, along with a second stint on that year's Warped Tour. On these tours Counterfit played alongside such bands as Tsunami Bomb, Saves the Day, Hot Rod Circuit, New Found Glory, Superdrag, the Mars Volta, Recover, and Finch.

In November 2004 the group decided to disband, and played their last show on December 11, 2004 at Ground Zero in El Cajon with the band Noise Ratchet, who were also playing their final show. Reed went on to play in First Wave Hello, while the Allen brothers launched their own project, the Helen Earth Band. Marc Allen also joined Finch, drumming for them until the group's indefinite hiatus in 2006. In the winter of 2006 Rodriguez began recording and performing under the name Silverbird.

Counterfit released a posthumous DVD/CD in late 2007 called Managing the Details of an Undertaking. "I've spent the past year putting together a documentary," says Marc Allen. "The film follows our last tour in support of Finch and Recover. The DVD also includes our entire farewell show and over 40 minutes of additional footage. A CD including 12 unreleased tracks will be included with the DVD, including two new unreleased songs that we played on that last tour."