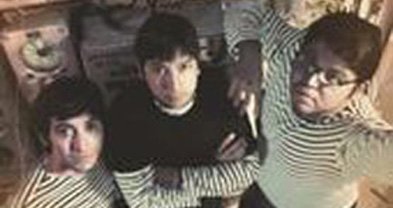 RIYL: The Zeros, the Heartaches, Fifty on Their Heels

Guitarist Rene Romero spent his teen years in El Centro, where there was one Top 40 radio station and no live-music venues for kids.

"I learned about the Velvet Underground and MC5 from a book in the library about the history of music," says Romero, 28. "El Centro was all agriculture back then. We would go out and pile up haystacks 14 feet high and 50 yards long. We would make a little party fort so no one could see in, and we'd have keg parties. Or we'd get generators and play punk rock in the desert. The cops would leave us alone. But you can't do that anymore.... Now there's all these new cookie-cutter homes that all look the same."

Romero plays with two other El Centro transplants, drummer Jesse Gonzales and guitarist/vocalist Joe Hernandez (both in their 30s), in a stripped-down, garage-ey trio they named the Corvinas ("...after the fish," says Gonzales). All three left El Centro to find "a real job" in San Diego. They started their band here two years ago, but now Gonzalez sees potential in the border cities of Calexico/Mexicali, which have a combined population of nearly one million.

Hernandez says "We have friends who are trying to get touring bands to stop by and play Mexicali [Mexico]. There's a bar called Berlin 77 in Mexicali, which has DJs and live bands. It's the happening place right now.... There's a lot of kids down there who want to be exposed to new bands. When you go down there, everyone is hospitable and gives you food, beer, and a place to stay."

Gonzales says, "We took the Heartaches and Fifty on Their Heels down there to play at an alternative art space in Mexicali called Casa de la Tia Tina's. The next night we played at Tommy's Casino in El Centro. It went over real well. We're trying to get back in there."