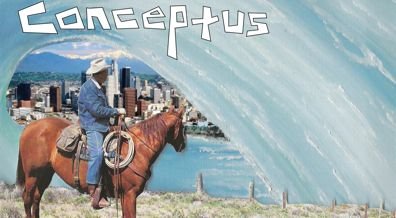 RIYL: Pavement, the Clean, Ween, the Fall, the Kinks, Sugarplastic, the Byrds, Welcome, the Lilys, the Beach Boys, the A Frames, Mudhoney

Originally based in L.A., Conceptus began in 2005 as the home recording project of a Chris Holmes.

Holmes describes their worst gig: “We played a Friday night in March of 2011 at Tower Bar that was a total disaster, definitely the worst show a few of us had ever played in any band. First of all, we were too loud for that room, secondly, we couldn’t hear each other at all. We were all out of sorts. People thought our drummer was drunk. My friend, who came down from L.A. to open the show with his band, was standing two feet from me, heckling me during the set, throwing me off my game. We played terrible. We all slammed beers pretty hard after that one.”

Their full-length Trebly Feelings was released in early 2012.

“I guess the story about the album cover art could be considered an interesting one,” says Holmes. “My grandfather, Dan Kiley, was a prominent landscape architect, and there’s a book devoted to his work. I utilized sketches from the book for the record art. With respect to the album title, it’s describing the nature of the songs: introspective, sensitive-guy lyrics, paired with bright, jangly, 1960s-ish guitars. Hence, Trebly Feelings.”

Everything on the album was recorded in the band rehearsal space in Kearny Mesa, with the exception of the drums, which were done at Black Box Studios. The album was mixed and mastered by Mike Kamoo (drummer of the Loons) at Earthling Studios in La Mesa.