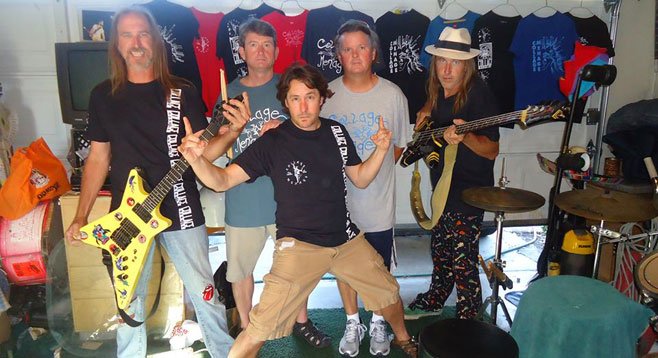 Billing themselves as the "Jesters of Rock,” Collage Menage went through around two dozen members since forming in 1988, with identical twins Hans and Fritz Jensen as the sole constant core. “To fit in with this band, you definitely have to have a strong stage presence and be part of a whole elaborate show,” says bassist Fritz. “It’s like Alice Cooper, Pink Floyd [and] Kiss, but with a sense of humor. We dress up from head to toe, we have props, TV screens and videos we shoot for all our songs…sometimes we wear a different hat for every tune. It’s just as important to fit in visually as it is to fit in musically.”

“We build our stage sets and we make and hand-paint the costumes ourselves,” says singer Hans. “There’s a lot of cardboard, foam rubber, Elmer’s glue, spray paint, and duct tape…we’re going for an elaborate look with a very low-tech budget.”

They make their own stickers, which they affix all over town. "I put them on cigarette machines in bars and on public trash cans, video game consoles, power poles, places like that," says Hans. "Or someplace where somebody else has already stickered." The group gives out band stickers at their shows.

"[The band's original paper labels] were indestructible and would stick so hard that, to peel them up, you had to shred them with a razor," says Hans. "Then we'd get in trouble when some idiot would stick it on someone's Rolls-Royce."

Several years ago, according to Hans, somebody stuck one of the Collage Menage stickers on a prize-winning pig at the Del Mar Fair. "We were supposed to play there and didn't know anything about the sticker.... They banned us from ever appearing at the fair."

The stickers now passed out by the band are manufactured on easy-to-peel plastic. The most videogenic band in SD - http://www.youtube.com/user/collagemenage has a compiled collection of all 19 of their handmade MTV-quality videos.

After taking around two years off, the band returned to the stage on October 21, 2013, with two new backup players at Second Wind in San Carlos, though gigs were scarce over the next few years.

In summer 2017, Fritz Jensen and Mike Crabb formed a new group called On the Fritz, with Jensen now playing guitar.