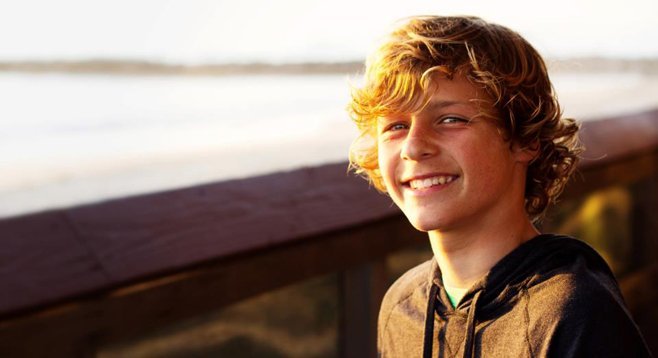 14 years-old in February 2013, surfer Cody Lovaas (pronounced low-vahs) was still a high school freshman when he played before another San Diego pop star, Jason Mraz, at an open mic in a coffee house in Oceanside. “We talked about surfing,” says Lovaas. “He gave me some advice. He said when a song comes to you, always write it down or you’ll lose it.”

That led to Lovaas auditioning for the same management company that represents Mraz, operated by Bill Silva, the longtime San Diego promoter who is now based in L.A., where he oversees his concert-promotion and management firm. “We went up to his office in West Hollywood,” says Lovaas. “We met his entire management staff.” Bill Silva Management has a staff of 12. Lovaas brought his guitar and played for Silva’s people, who agreed to manage him.

Lovaas’s father says he was impressed with Silva’s even-handed approach to his son’s career. “Cody never wanted to go the Disney or Nickelodeon route. Fame has never been his driving force. The love of music is. [Silva’s] biggest point was that we take this slowly and let it grow organically. It has to be done right. No push. No pull.”

The singer/songwriter/guitarist recorded an album for action-sports company Hurley, which let him use their i-house recording studios in Costa Mesa. The album, Dropping In, was produced by Grammy-winner Alan Sanderson (Fleetwood Mac, Elton John, Switchfoot). Lovaas wrote all nine songs.