The Dinettes, the Runaways

The Cockpits were an all girl new wave/punk band, originally featuring Jolie Ramage, Shawn Kerri, Doriot Lair, and Joyce Rooks. Shawn Kerri was later known as a cartoonist, and guitarist Joyce Rooks was a local black girl. "I joined the Cockpits in 1978 by answering a Reader ad," recalled Rooks in 2010. "I had a guitar and amp and a cello, which I kept hidden as it didn't seem punk rock enough at the time. The Cockpits played their first gig at Porter's Pub at UCSD, opening for the Alley Cats, one of the coolest L.A. punk bands."

Later becoming co-ed, they recruited drummer Dan McLain, aka Country Dick Montana. They played punk-friendly venues like the North Park Lions Club, opening for headliners like the Penetrators (who McLain also sometimes played with) and DFX2, though the band ultimately only lasted around three years.

The Cockpits essentially changed members and morphed into a new group called the Dinettes, also originally an all-girl lineup.

This cool early photo of the pioneering local all-girl rock band was just posted on Facebook by Joyce Rooks (photog Edi Paul) - look for an upcoming Reader feature on our city's history of all-girl rock bands, including the group that spun off from the Cockpits called the Dinettes, as well as the Beatchicks, who opened some shows for the Beatles (and which included Gregory Page's mother!) and many more - 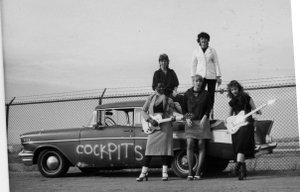