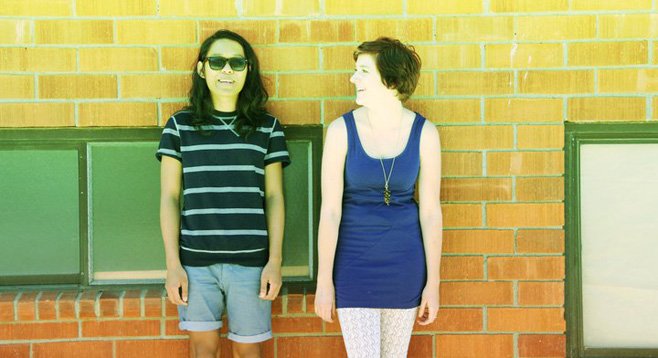 “The San Diego scene for our sound is alright,” says Beejay Buduan, guitarist and songwriter in Clockart, a rock band based in Rancho Bernardo and Paradise Valley.

“It’s more of a rock city. It was getting pretty big here, the whole beach, chillwave thing. Bands like Dirty Gold and TV Girl happened and the scene got a lot bigger, but it’s kind of dying now.”

Chillwave was a more-or-less made up genre was termed by a Hipster Runoff blogger to describe a handful of bands with vaguely similar styles, namely a synth-heavy, ambient, lo-fi New Wave sound driven by mostly dance-friendly beats.

Blogger Carles likened it to “something playing in the background of an old VHS cassette that you found in your attic from the late 1980s/1990s” and, for a few months around the summer of 2009, it was the raddest thing on the planet (or at least on Pitchfork).

Says Allie, “Beejay — he writes all the instrumentation — describes our sound as ‘bliss.’ For me, it’s about nostalgia for things that don’t exist anymore. Or never existed.”

“Isn’t everything about relationships?” Allie says.

“We were going to be called Clock Heart, but they thought it was too girly,” says Allie. “It’s from the Wizard of Oz — ‘Hearts will never be practical until they can be made unbreakable.’ But Clockart is cool, too, because music is decorated time.”