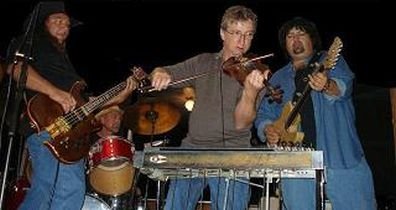 The City Limits Band is a country group founded in 2001 by North County singer/songwriter Les Allen in 2001. Primarily a country rock band, they play a variety of top 40 country, rock, blues, pop, and surf.

In 2008 City Limits performed over 100 club, private party, and corporate event dates. They were chosen as opening act for AJ Croce at the Festival of Sail 2008, and were also featured on KSON 97.3FM 92.1FM’s Hometown Handshake Tour twice.

As of 2010, the band also backs up local Elvis impersonator James Kruk. “He’s been promoting us as California's best Vegas Era Elvis Tribute Show,” says Les Allen. “We’ve been gaining much momentum with every concert...we were featured on KUSI in the morning, and interviewed by Chrissy Russo for our Viejas Big Country Showdown Competition.”