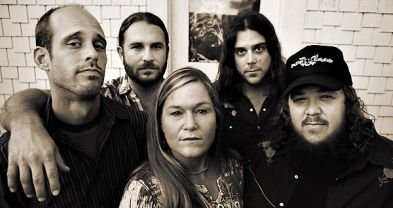 Citizen Band likes guitars. They believe in amplification. They live for music. Rock 'n' roll is their religion, and you better come ready for the preachin'.

Out in front is Jeff Berkley, who cultivated his musical roots in alternative rock bands, then turned his attention to folk when he caught a listen of Bob Dylan and Woody Guthrie. As a founding member of the Joel Rafael Band, Berkley became known on the folk festival circuit with his exceptional and unique hand percussion work on the djembe. Berkley shared stages and accompanied other performers including Jackson Browne, Ben Harper, David Crosby, the Indigo Girls and Bruce Cockburn among others. Playing with all these amazing songwriters was not lost on Berkley, who channeled that education into his own songwriting. In 1999, his efforts were rewarded with the prestigious Kerrville New Folk Songwriter Award. He's known for his softer, acoustic side seen frequently as part of the award-winning acoustic Americana duo, Berkley Hart, who receive national attention on the same folk circuit.

But Berkley’s rock ‘n’ roll side needed an outlet, in the form of a Telecaster. He's lived half his life on the road, knows the same comfort of dank sticky coffee and pancakes in the morning and nag champa and herb before the gig, the shock on his lips from a charged microphone. It's second nature for him to lead a mystical musical frenzy with his words and his electric & acoustic guitars. And with new songs needing life and the lure of a buzzing amp, Berkley went looking to turn it up. He put out the call for CBers, waiting for someone to copy. He got a big 10-4 from Bill Coomes, Marcia Claire, Mike Spurgat and John McBride.

The drummer had to be a throwback. Equally comfortable with driving beats or laid-back ambiance, Bill Coomes brings the soul of southern rock and the heart of good ol' rock 'n' roll.

The choice for bass player was easy. Marcia Claire paints intricate, melodic, earth tones into the Citizen Band soundscape, like cellist Yo-Yo Ma with the soul of James Jamerson. As if that weren't enough, she turns to other colors like mandolin & piano with the same delicate power only a real songstress can deliver. In other words, she rocks with a woman's touch.

Mike Spurgat lays in the perfect lead guitar work. Tasty licks and sweet sounds spill effortlessly from his fingers. Bringing Mike into the fold adds a depth to the music that lures you in playfully then roughs you up with a smokin' solo.

John McBride, adds the haunting pedal steel to the groove. From the San Diego home twenty, their rigs are ready and they’re about to put the hammer down.

Spurgat moved to Nashville in 2011, but the band says they will soldier onward.