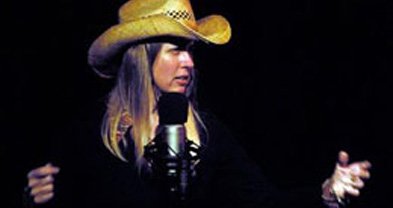 Cindy Lee Berryhill arrived on the scene in 1987 with her universally acclaimed first album, and her airplay/word-of-mouth hit song "Damn, I Wish I Was a Man" ("I'd be sexy with a belly like Jack Nicholson"), both of which established her as the first of a series of Girls With Attitude (So much so that the next to come along, Ani DiFranci, Alanis Morisettte, and Liz Phair, were surprised to find themselves being compared to this woman they'd never heard of!)

After an album, some singles, a few U.S. and Europe TV appearances and a several tours (with Peter Buck, Christy Moore, and the Smithreens), Berryhill won some dedicated fans, including Beck, Freedy Johnston, Jim Carroll, Steve Poltz of San Diego's Rugburns, and many others.

Berryhill's song "When Did Jesus Become a Republican?" spent most of 2006 and 2007 as a featured track on Neil Young's "Living with War Today" website, where songwriters are encouraged to submit political music. "They actually have a kind of ranking system there for the protest songs," she says, "and I [went] from 'newly added songs' to number 13. I didn't even know it had been added until L.A. Air America radio called and said they found my song on Neil's site and would I do an interview."

Berryhill says she went through the regular submission process and the song's embrace on Young's webpage is unrelated to the fact that, a few years ago, she worked for Young's manager Elliot Roberts and Lookout Management. Sample lyric:

"When did Jesus turn the tables on tender and join the money lenders?

'Stead of sharing with lepers, he's sellin' shares of Halliburton?"

She underwent appendicitis surgery on June 21, 2013. Her husband, rock critic Paul Williams, died in 2013, having suffered declining health ever since a 1995 North County bicycle accident. Songs written during that period appeared on her 2016 album The Adventurist, which she dedicated to Williams' memory.

Berryhill says, “I vowed to write Paul a song cycle. Not songs of sadness or the despair I’d felt, but songs that reflected the love I had for him, and a remembering back to the enormous flood of feelings we’d had on meeting and courting. I wanted to write songs that felt like they’d come from that muse-driven place we feel when we fall in love.”

Her early albums were reissued beginning in August 2019 by Omnivore Records, including new liner notes and bonus tracks, beginning with her Garage Orchestra LP.