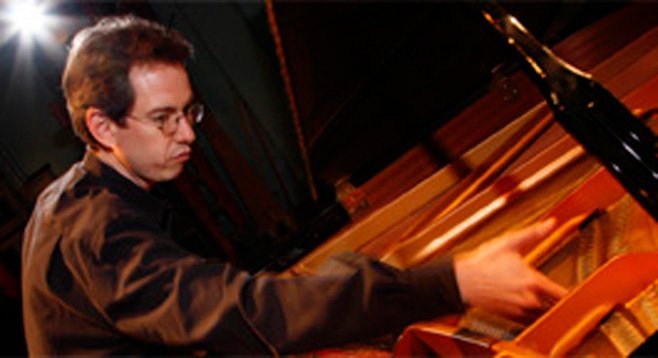 Christopher Adler is a composer, improviser, and performer. As a pianist and conductor, he has performed with many of the West coast's finest improvisers, he performs contemporary solo and ensemble repertoire and is the pianist for the San Diego New Music resident ensemble NOISE.

He credits San Diego with granting him “fellow artists and friends with a shared vision and a commitment to a high-level performance of challenging contemporary music.”

Adler is one of the few people with an extensive traditional background composing and performing new works for khaen, a free-reed mouth organ from Laos and Northeast Thailand that sounds like three or four trumpets at once.

He began learning to play the khaen after encountering traditional Thai music at a festival in Washington, D.C., in 1994. He has studied with many khaen players in Northeast Thailand and is now recognized in Thailand among the finest players of traditional styles of improvisation. Adler has performed his compositions for khaen at the Bang on a Can Marathon, Music at the Anthology, and at universities across the United States and Thailand.

His compositions for khaen have also been heard on Tzadik and on WGBH's Art of the States, and his improvisations may be heard on pfMENTUM, Nine Winds, and Artship Recordings.

“For most of my time as a student, I was a pipe organist,” he says, “and I gave it up only reluctantly after moving to San Diego...I hope one day to return to the pipe organ.”

He received Ph.D. and Master's degrees in composition from Duke University and Bachelor's degrees in music composition and in mathematics from the Massachusetts Institute of Technology, before taking a post as Associate Professor at the University of San Diego, where he has been a faculty member since 1999.

Adler comments on the city’s avant-garde scene, that “there has always been exciting and exploratory work by committed artists happening within the universities and in the community, but the venues have become more difficult to sustain. And so as a result, it is getting increasingly difficult for these artists to reach their audience. My experience is usually that when people discover these events and check them out, they enjoy them and are surprised to discover that such things happen quite regularly.”

As private venues are more difficult to sustain, “the universities provide a crucial role in the incubation of innovative artists and in the curation and continuance of our shared musical tradition.” And Adler’s doing his part, with the Annual SoundON Festival of Modern Music.

“San Diego New Music [a local nonprofit] began presenting the soundON Festival in 2007,” says Adler, and I was involved both in organizing the festival and as pianist in the ensemble NOISE, which undertakes the majority of performing duties for each festival. The festival format has been wonderful in allowing all of us to program works that are difficult to fit onto regular concert programs…multiple concerts in just a few days brings together many more performers, composers, and community members than just one concert could, and so the festival functions also as a great place to find old friends, meet new ones, and get lots of people inspired to undertake new projects.”