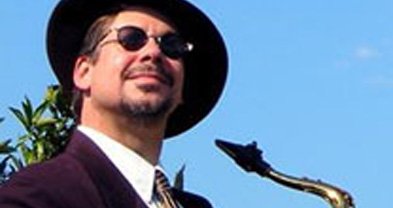 La Mesa's Chris Klich of the Chris Klich Jazz Quintet is one of the few locals who can say they've played China, specifically, in Macau. "We [the Mar Dels] were playing at Jimmy Love's downtown when this Australian chain-smoker, Ted, came up and said he wanted us to do this gig in Macau," says Klich.

"We gave him a card and thought we'd never hear from him again. Turned out, he was this lawyer by day, party planner by night, who put together 'fabulous events' in exotic locations for the rich and bored. We played a bunch of gigs for Ted in Macau and [other parts of] China, and they were all like Fellini movies with beautiful, wasted people in various stages of undress dancing to 'Wooly Bully' and 'Walking on Sunshine.' On my website there's a photo of me with a bunch of these party guests. I'm the one squinting, since my glasses fell off as I exited a Macau taxicab, which sped off despite my pleas to stop."

Also in Macau, "I had to dress up as Paul McCartney and pretend to play bass for a ‘Legends of Rock’ set. Of course, there was no sax player in the Beatles, so I had to shoulder a Hofner bass and pretend I was McCartney. I usually made about $200 per Mar Dels gig, but when we did the Legends thing, clients usually paid us more. Ironic, I actually don't know the first thing about playing bass.”

“We were doing a performance atop Victoria Peak in Hong Kong harbor on the night the Chinese took over Hong Kong. On that trip, we also played at the China Club, an exclusive venue usually only open to members of the Politburo, where Chairman Mao had all of his social affairs. For that gig, the police threatened to seize our equipment if we continued playing past the permitted time. While [the promoter] kept yelling at us that we should keep playing, we were watching the Chinese police gathering up our stuff, and contemplating languishing in a Chinese jail cell. I believe a lot of money exchanged hands before the police changed their mind and let the show go on.”

“I'll never forget landing in Taipei airport as Typhoon Zed hit the island. It's a miracle we landed safely, and I still thank God that we did. After watching the storm tear apart pieces of the airport for about twelve hours, we flew out through the eye of the storm.”

On dreams and music? Klich responds, "I still have dreams of dressing up like Paul McCartney and pretending to play bass while lip-synching to Beatles tunes."

He says his chosen instrument makes concert performances tricky. "Well, that would probably be related to the fact that I play a bunch of instruments that all use reeds and that I often play in very dry conditions. Santa Ana days are the worst, especially if it's an outdoor gig. Gigs in Palm Springs or Borrego are also bad. The problem is, while I'm playing one of my horns, the other ones are just sitting there with the reeds [pieces of cane that vibrate to produce the initial sound that is manipulated by the fingers and shape of the sax or clarinet] drying out. When the reed is dampened again, the edge of it gets all rippled for a few minutes and the air across it is turbulent and difficult to control. The only solution is to get it wet and hold it against a flat surface for about a minute, which doesn't work real well when the rest of the band is already playing the next song."

He describes his equipment: "Selmer Mark VI alto, tenor, and baritone saxophone, a Yamaha Custom soprano sax, a Selmer Centertone clarinet, and a Pearl flute. All of them are old horns except the flute -- the alto was made the year I was born, 1960, and the clarinet is as old as my mother, but obviously I can't tell you how old. Let's just say it's 'a clarinet of a certain maturity.' I also use a Mackie mixer, Shure SM57 mikes, American Audio speakers, and a bunch of cables that I like to call black spaghetti, since that's what they look like when you're trying to find out which one isn't plugged in. Oh, and my nice, but cheap, lighting rig that I've modified with specialized musician supplies from an obscure company called Home Depot."