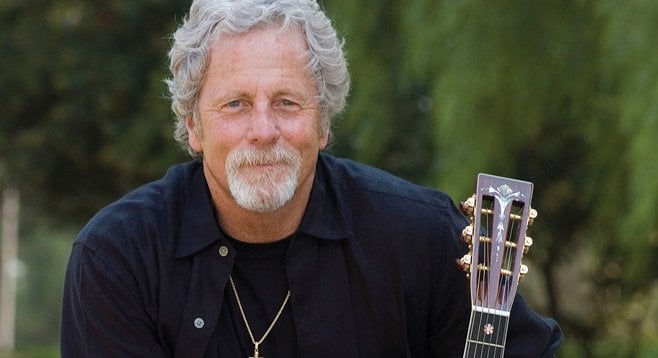 Rock and Roll Hall-of-Famer and former Byrd/Flying Burrito Brother Chris Hillman is best known as the founder of the Desert Rose Band and the folk supergroup Manassas. Having grown up in North County San Diego, one of his earliest local bands, the Scottsville Squirrel Barkers, also included guitarist Ed Douglass, who founded the original Blue Guitar shop on Midway Drive and later operated the Double Eagle guitar shop, through 2007.

After co-founding the Byrds, Hillman cowrote the Top 40 song “So You Want to Be a Rock ‘N’ Roll Star” (1966), as well as arranging and cowriting two songs on the band’s 1968 album Sweetheart of the Rodeo. In 1991, Hillman’s work with the Byrds got him inducted into the Rock and Roll Hall of Fame.

He next cofounded the Flying Burrito Brothers with fellow former Byrd Gram Parsons, before spending time with Stephen Stills in Manassas and releasing a 1976 solo album, Slippin’ Away.

The Desert Rose Band was launched in 1986, releasing several albums and earning two Grammy nominations. Having gone on hiatus around 1993, that band reunited in 2008 and remains extant. Hillman also continues to record with fellow Desert Rose vet Herb Pedersen.

As of 2010, Hillman was living in Santa Barbara. In February 2011, he took part in Point Loma Nazarene University’s annual Writer’s Symposium by the Sea, as a speaker and performer. He played with the Desert Rose Band at Albert Lee's 70th birthday party on January 9, 2014, at the Canyon in Agoura along with fellow famous former neighbor Rosie Flores. The bill also included Emmylou Harris, Rodney Crowell, Peter Asher, Jerry Donahue of the Hellcasters, Lauence Juber, Jack Sh*t Band, Scarlet Rivera, and more.

His 2017 album Bidin' My Time was recorded with Tom Petty. The following summer, he joined fellow Byrds co-founder Roger McGuin for a short tour performing 50th anniversary sets of their Sweetheart of the Rodeo album with guest Marty Stuart, as well as appearing with Herb Pedersen at Bernardo Winery on August 12.