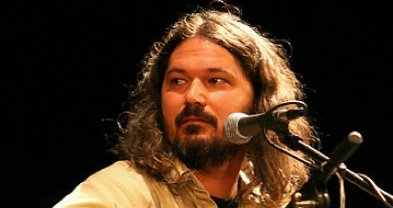 Current Status: Currently performing with a trio (John Mailander on fiddle and David Bandrowski on banjo) every month at Urban Solace in North Park and the Red Barn in Wynola Springs.

Born in 1969 in Richmond, Virginia, Chris Clarke comes from a family of musicians. His grandfather, J.P. Clarke, was a ragtime piano player in vaudeville, as well as an old-time fiddle, guitar, and mandolin player. His brother and cousin are both performing artists in Virginia. As a kid, Clarke was exposed early on to old-time fiddle and blue grass music at family reunions and pickin' parties. He began writing and playing guitar after seeing Bob Dylan perform with the Grateful Dead in 1986. This experience changed his life forever and served as the compass for his musical exploration for the next few years.

During college in Elkins, West Virginia, Clarke was exposed to the traditional music masters who took up residence at the Augusta Heritage Center -- fiddlers like Ernie Carpenter, Tracy Schwarz, and the country blues of John Cephas and Phil Wiggins. During this time he also studied finger-style blues guitar and developed an ear for writing melodies. While in Elkins, he completed an undergraduate degree in biology and environmental science.

Returning to Virginia in the early 1990s, Clarke lived in a turn-of-the-century log cabin on the edge of the Blue Ridge Parkway and met Jeff Bibb, the founder of Webb Straps. It was through Bibb that Clarke would get his first Flatiron mandolin, have dinner with Peter Rowan and Jerry Douglas, and begin his "bluegrass woodshedding" period. Around mid-1990, he finished a Master's degree in biology and worked as a freshwater fisheries ecologist before moving to California.

California brought much change. Clarke was married to his wife, Tiffany, in 2001 and they continue to host a house concert series at their home in Kensington. He met Walt Richards at a mandolin concert and began to study the music and art of the mandolin. Soon after that, Clarke met up with Mike Compton and David Long, and was introduced to Bill Monroe-style mandolin playing. In 2004, Clarke formed the Second Hand String Band and began performing regularly at festivals and venues across Southern California.

Clarke also teaches and plays mandolin, guitar, and upright bass, and performs with the bluegrass band Plow. He has also played with Darren Weiss and Sarah Voytek as part of the Monroe Avenue String Band.

As of 2012, he plays in a country-blues duo called Chris Clarke and Dane Terry, performing pre-war blues, Americana, folk, and contemporary eclectic selections, as well as originals. Clarke and Terry previously played together in Zapf Dingbats, who were nominated for having the Best Blues Album at the 2012 San Diego Music Awards.

He plays a 2005 Old Wave F4 mandolin, a 1998 Woodley oval hole A mandolin, a 2005 Santa Cruz D/PW BZ guitar, and a 1970 Hofner upright bass. He uses D'Addario strings and smokes Drum tobacco (at least when his wife ain't looking).