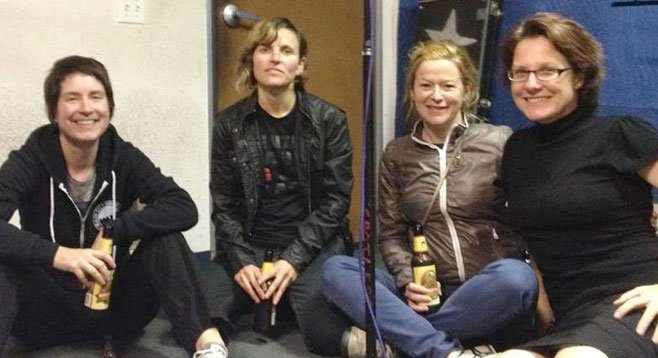 Drummer Morgan Doctor recalls being part of a mid-90s music scene in San Diego that was “pushing music styles and composition” courtesy of acts such as Creedle. “It was definitely a movement,” she said. “Chinchilla, I think, really took this to the next level with being very performative in our live shows. Shows included shadow scenes with actors behind us, an acted-out sex change operation on stage, male dancers, and numerous costume configurations. We were always trying to push the boundaries of live music.”

"We toured some here in the U.S.," says Krista Kansas. "We decided to call it after the Halloween show and go our separate ways." Julie D was living in Seattle by January 1997. Krista Kansas was the sole member of Chinchilla to stick around town. Later known as Krista Nielsen, she appeared on the Maquiladora album Wirikuta, among other local-centric recordings. Morgan Doctor went on to play with the Cliks of Toronto, Canada.

The band reunited to play dates in April 2014, including the Casbah on April 26. They reunited again in January 2019 for the Casbah's 30th anniversary celebration.