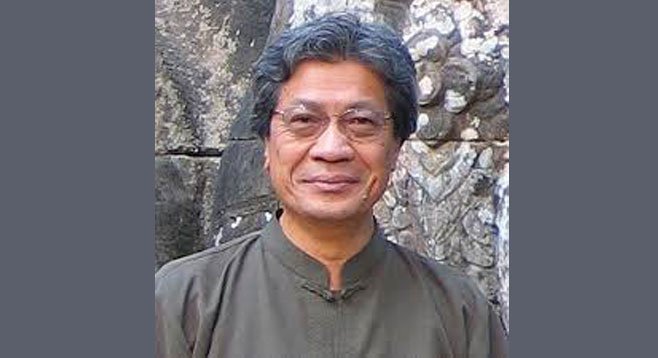 Cambodian composer Chinary Ung was a member of first graduating class of Cambodia’s National Music Conservatory. After moving to the U.S. in 1964, he earned a bachelor’s and master’s degrees in music from the Manhattan School of Music, as well as a Doctor of Musical Arts degree from Columbia University. He has been a professor of composition at UCSD since 1995.

In 2008, he debuted “Spiral XII: Space Between Heaven and Earth,” an extended musical composition concerning Kristallnacht, the anniversary of a night in Germany when nearly 100 Jews were killed and thousands more were sent off to concentration camps, and the Cambodian holocaust, during which the Khmer Rouge killed over a million people.

As of 2011, the composer lives near UTC with his wife, violist Susan Ung, and their two children. The U.S. premiere of his work “After Rising Light” happened June 3 at California State University Santa Barbara. In 2013, UCSD presented a symposium and concert dedicated to his works, and he was promoted to Distinguished Professor of Music.

After his 70th birthday in 2013, he was awarded a grant by the Fromm Music Foundation, commissioning a marimba solo piece intended to be performed by his frequent percussion collaborators Gregory Beyer, Stephen Solook, Beverley Johnston, and Lynn Vartan.

The following year, the composer was one of three winners of the Asian Arts Council John D. Rockefeller III Award, receiving $50,000 in recognition of his “contribution to the international understanding, practice, or study of the visual or performing arts of Asia.”