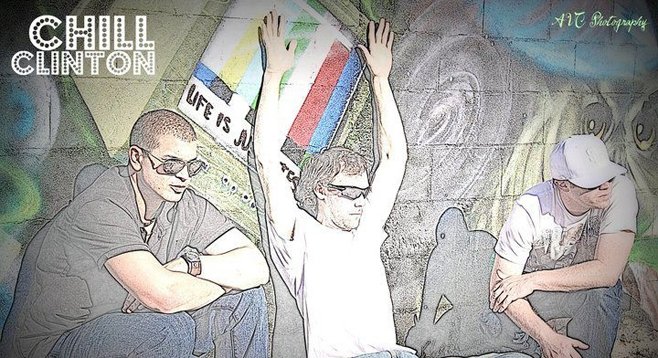 Based in North Park, Chill Clinton was founded by guitarist/producer Dan Rabb and DJ Mark Morante, who met in the dorms at SDSU in 1998. After being in several separate San Diego bands over the years, they formed Chill Clinton.

“We were playing our first show at the Belly Up and, during the set, I was really getting into it, jumping around really trying to amp up the crowd,” Morante recalled for the Reader. “Well, I got into it a little too much and didn't realize I kicked our guitarists cable out in the middle of his solo. He was still mad at me a couple years later.”

Drummer Sir Patrick Knightly joined in early 2011, and MC Touch of CAS joined in 2013. The band mixes electronics with live instrumentation, taking inspiration from dub, hip-hop, rock, and dancehall influences. Their full-length Lift and Cut was released in 2012.

Gig-wise, they've played support spots for Fishbone, Mickey Avalon, Capitol Eye and Stranger at San Diego venues ranging from dive bars to the Belly Up, the Casbah, Winston's, and House of Blues. The band has also been featured in the Coachella Valley Weekly and Boogie Magazine.

By 2016, Mark Morante had quit. "I made a choice to walk away from the band Chill Clinton as there was a certain member of the band who made some sympathetic comments online about a known athlete, Ray Rice, who had struck his wife. For me when it comes to men hitting females there is no grey area...I decided to walk away from something I loved and worked harder at than anything else in my whole life, but it was the right thing to do and more people should speak up about things like this, even if it's easier to just let it slide."

The group was a full live band in 2017, with a roster including Pat Knightly on drums and MCs Touch of CAS and the Burns brothers, Dominick and Jessie.

By summer 2019, Mark Morante had returned to the band, now a trio also featuring Dan Rabb and Pat Knightly.