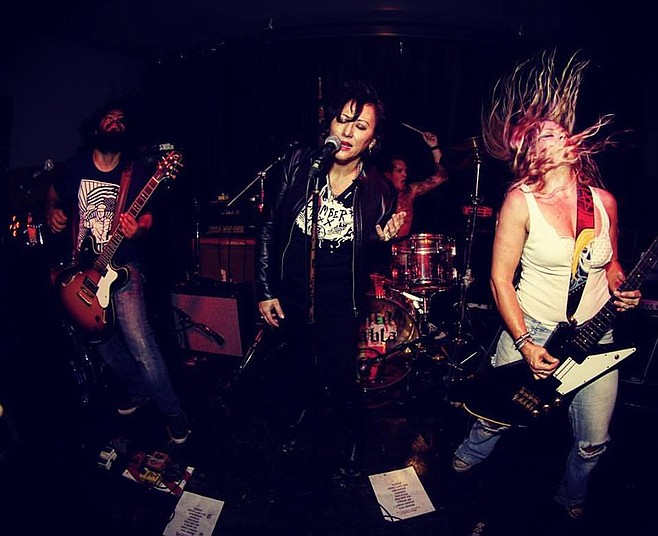 Early gigs proved rocky, especially on the road. "We played this broken down hall in the middle of the San Bernadino hood in summer 2015, and it was bad. It was about 135 degrees in there, the sound was abysmal, and the crowd was non-existent due to the promoter having the local acts cancel. The venue wouldn't even give the bands water, we had to buy it out of the bottle from the bar."

"After that, the dude tried to pay us in cocaine and strippers. We declined and decided to mark that one down for the books."

Singer Elizabeth Borg aka Epiphany was diagnosed with breast cancer in 2013, receiving treatment and taking up her duties with the band again. They opened for Nashville Pussy at the Hideout in late 2015. "That was sort of our arrival show, and a high water mark and would end up being the last before we went on a cancer break," says Tats.

Their debut full-length had already been recorded and mixed by MixSkywalker in San Diego, and mastered by Jeff Forrest at Doubletime Studios. "The album is self titled," says Tats. "We threw around many names for it, but nothing seemed to capture the essence of our debut. Lots of our favorite bands such as the Ramones, KISS, Black Sabbath, and Van Halen all had self-titled debut records, so we figured why not."

The album finally debuted in August 2016 with a release party at the Casbah, their first live show since opening for Nashville Pussy late the previous year. Epiphany had been diagnosed with cancer again at the time, and it had metastasized in her brain. She passed away in October, with the band announcing an indefinite hiatus.