"The Charms were a totally San Diego band from 1984 to 1990," says guitarist Bill "Rusty" Jennings. "We played extensively in the area and on tour and put out three full-length CDs and a bunch of singles."

Jennings, though no longer based in San Diego, still fronts the Charms (not to be confused with a Boston band using the same name). 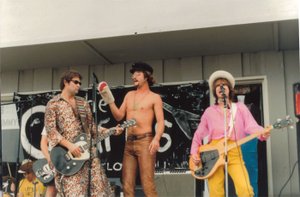 Love those Charms. Comin' down for all three shows - woohooo! Juri