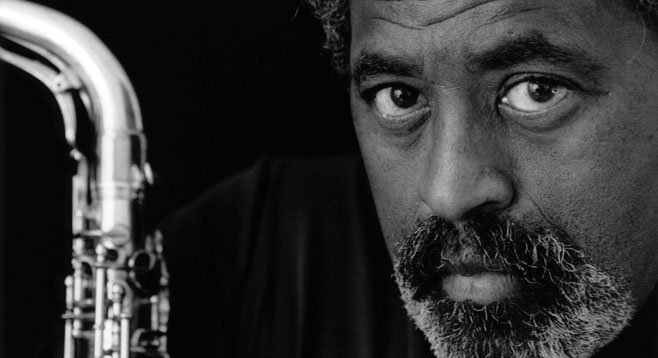 Alto saxophonist Charles McPherson was born in Joplin, Missouri, and raised in Detroit, Michigan. “I was attracted to the sax first of all when I was really young,” he says. “When I was, say, four...these territorial swing bands would come through the area in the summertime and play at a big park, and I was mesmerized and very attracted to the saxophone. Now what got me, of course, was the shiny, gold color.”

After that, he started gigging at clubs around Detroit, before moving to New York and playing with legendary jazz cat Charles Mingus. “At the time, he needed a sax player and a trumpet player. The guys he had were quitting. A fellow Detroiter named Yusef Lateef introduced me and my friend, a trumpet player, to Mingus. He came to hear us play at a jam that night, and he hired us.” McPherson chuckles. “It was Mr. Toad’s wild ride.”

McPherson moved to San Diego in 1978. “Joe Marillo, he’s a tenor sax player, he was booking the Catamaran. I played there in ‘78 or ‘79. But now that I think about it, it could have been the Bahia. Jimmy Cheatham was hosting shows there, too. I also played at the Blue Parrot in La Jolla in the ‘80s. Chuck’s Steak House. Elario’s. The Crab Catcher, that was in La Jolla, too.”

At the time, McPherson had just broken off with Mingus for the second time. “I did that for six or seven years, and then I quit...[it was] the pressure. Just Mingus. Just the way he was. He was a talented man. I learned a lot, but it was not an easy ride. He was very confrontational. It was just issue after issue; every issue that could come up with a human being. But also, by that time I had a couple of kids and I thought I’d like to see about getting a regular job.”

After quitting Mingus the first time, McPherson took a job working for the Internal Revenue Service, before returning to play with Mingus for a few more years and then striking out on his own. “What I play I would say is definitely informed by bop, post bop, or bebop, or whatever you want to say. But it’s not exactly that. Labels are hard to come by. I like to call it neo bop. A guy like me is informed by Charlie Parker. When I write music, it’s different than Charlie or Dizzy, but it’s a branch off that tree.”

McPherson has taught saxophone for decades. He led master classes at San Diego State back in the '80s. But now his teaching is limited to a few students in his own home.

“The reason I like the saxophone is because, out of all the instruments, it’s the closest to the human voice. How it sounds, and also how the tone is produced, what you do with your throat and your mouth. When you play saxophone, it's like you're singing. You have an open throat, and you’re thinking vowel sounds, and, indeed, the instrument is very voice-like; it’s very close in timbre to the human voice. In fact, the guy who invented the saxophone, Adolphe Sax, a Belgian guy, from what I understand, from what I read about him, it was actually his intent to make a horn that sounded like the human voice. And also to make a horn that sounded like the string section in the orchestra.”

“So, for all the saxophones, there’s a corresponding string instrument as well. Like, the soprano sax is a violin, the alto is like a viola, the tenor is like a cello, and the baritone is tonally similar to a string bass. They overlap. So you can listen to a sax quartet, and it sounds pretty damn near to a string quartet. So there was some deliberation on Adolphe Sax's part. To have string qualities as well as woodwind qualities and also to have the projection ability of brass instruments as well. This guy was a genius.”

73 years-old in July 2012, McPherson was living not far from SDSU with his wife and daughter, in Talmadge Park, though he rarely plays local gigs. “Most of the time, I’m in New York, Europe, or Japan. If you want to make a living as a jazz musician, you have to travel. There’s not enough local venues or activity to support a career here. I have to hit the road, Jack.”

He laughs. “And I don’t mind. I’m not gone for very long, and it’s kind of fun to get away and see other countries.”

In 2014, McPherson wrote the music for a ballet he titled Sweet Synergy Suite. It’s not his first ballet “‘Marionette’ — I actually wrote a tune for [my daughter Camille] when she was four or five. I wrote a couple of things for her,” he explains, “but they were never performed.” He likewise admits he showed up with his alto sax and played in a couple of her school recitals, “because it’s my kid.”

He got to collaborate with his daughter in May 2018 while 25-year-old Camille was a featured soloist celebrating her sixth year with the San Diego Ballet. Joining forced with the ballet company and with choreographer Javier Velasco, McPherson presented a politically charged program, “Reflection and Hope,” under the title A Night of Jazz and Dance, at downtown's Lyceum Theatre.